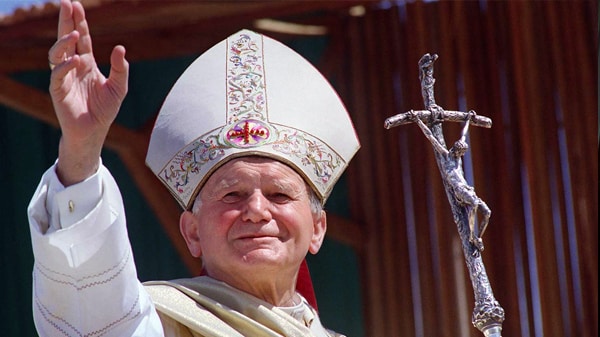 Vladimir Putin’s War against Ukraine continues to wage a path of destruction. Based on figures from the United Nations, at least one-third of Ukrainians have been forced to leave their homes, an estimated 13 million people are stranded in affected areas, and 5.2 million children are in desperate need of humanitarian assistance.

Putin’s invasion has resulted in the largest refugee crisis in Europe since World War II. At risk in this conflict is the freedom of the Ukrainian people. For those who lived under the iron fist of the Soviet Union, the War in Ukraine brings back dire memories.

Just as Saint John Paul II called for peace during the Cold War, Pope Francis asserted, “May there be peace for war-torn Ukraine, so sorely tried by the violence and destruction of this cruel and senseless war into which it was dragged.”

Throughout his tenure, Pope John Paul II was a voice for liberating the oppressed from the occupation, destruction, and corruption of the Soviet Union.

This week marks the 43rd anniversary of Pope John Paul II’s historic nine-day pilgrimage to Poland. Less than one year after his election as Bishop of Rome, from June 2-10, 1979, the Polish pontiff traveled across his homeland, inspiring a revolution of conscience that would transform Poland and reshape the spiritual and political landscape of the 20th century.

Leading up to his pontificate, John Paul II endured decades of destruction and despair alongside his Polish compatriots – first at the hands of the Nazis in 1939 and then at the hands of the Soviets in 1945. As Newt and I highlight in “Nine Days that Changed the World,” millions of Poles struggled to survive amidst the violence, oppression, and suffering of the 20th century.

Despite the turmoil that endured throughout the country, the Catholic Church in Poland remained largely intact, and the faith of the oppressed remained strong.

When Pope John Paul II traveled to Poland, as the first pope in history to visit a communist country, almost one-third of the nation turned out to see the Holy Father, while the rest of the nation and the world followed his trip on television and radio.

While in Warsaw, on the first day of his pilgrimage, Pope John Paul II declared, “There can be no just Europe without the independence of Poland marked on its map!”

In more than 50 speeches to millions of Poles suffering under the Soviet regime, Pope John Paul II delivered a message of hope, faith, and freedom. His pilgrimage marked a significant turning point for the Polish people from communism toward freedom and liberation. The Holy Father’s defiant opposition to communist oppression was a source of strength that reignited the spirits of the Poles and others around the world.

The pontiff’s historic pilgrimage captured the attention of a future U.S. president, who would later become an indispensable ally in the fight for freedom.

At the time of Pope John Paul II’s pilgrimage, former Gov. Ronald Reagan hosted a popular radio show in California. In numerous broadcasts, Reagan discussed the significance of John Paul II’s journey to Poland. In one broadcast, Reagan remarked, “It has been a long time since we’ve seen a leader of such courage and such uncompromising dedication to simple morality.”

Reagan announced his candidacy for president just a few months later, in November 1979. Following a successful election, President Reagan met with Pope John Paul II in Vatican City in 1982 and asked when Eastern Europe would be free from Soviet domination.

When the Pope responded, “In our lifetime,” the President grabbed his hand and stated, “Let’s work together!”

Together, President Reagan and Saint John Paul II inspired a movement that consigned the Soviet Union to the “ash heap of history” on Dec. 25, 1991.

Today, the people of Ukraine once again face an existential threat. For freedom and peace to triumph over oppression and destruction, Ukrainians and people around the world should look to Saint John Paul II’s historic pilgrimage in 1979 as a source of strength and hope.