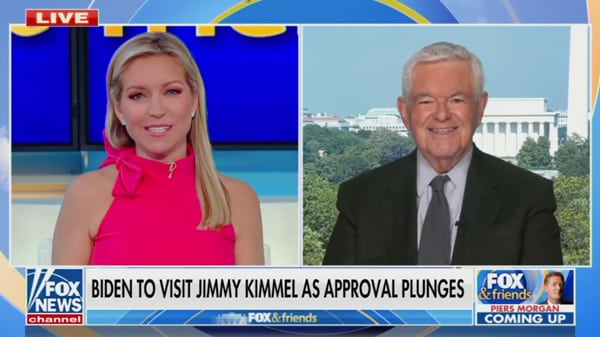 Well, first of all, Callista went out Saturday and filled up her car and it cost $104.50. She came home in a state of shock. I don’t think there is enough humor on late night television to offset $104 for gasoline. And of course, in places like California, it is even higher up to $8 in some parts of California. People are in a state of shock. As one lady said in Washington, Pennsylvania she had to go to five different stores to get infant formula she couldn’t afford the gasoline to go to five different stores. People have this compounding effect. And people go and try to buy groceries and groceries are going up faster than gasoline right now. You are about to have electricity brown-outs around the country because we failed to invest in a reliable electric system while asking people to buy electric cars. All these things are compounding. And I think the Biden people, including the president, don’t have a clue about reality. This is not a message problem. This is a reality problem.

They live in a left wing crazed bubble in which they impose rules. You just had a brief story about this in terms of Tampa Bay Rays. Imagine that one of the major league baseball said you have to wear a Christian cross, or you have to wear a Jewish star of David to show your support, you know, people would be up in arms. Now instead we are told that you have to be in favor of specific lifestyles in order to show up on the baseball field. I think people are looking at all this stuff together. Not any one thing, the cultural war, the economic disaster, the foreign policy mistakes and frankly, President Biden’s personal incompetence. I mean, you watch him for a while and you cringe to think that this is the commander-in-chief, the president of the United States and it’s clear at times that he is just out to lunch. He doesn’t have any idea what he is doing.