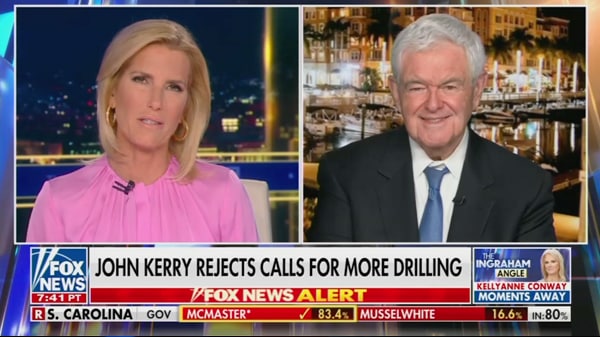 Well, first of all, on a personal level, the more I’ve watched the last five or six weeks, the more I worried about my own investment strategies, what I’m doing in terms of trying to save money, where to put it, what’s happening. I think it’s really an enormous, enormous problem. And the average American knows it because they go out and they buy gasoline. Or they go to the store to buy food. Or they try to find infant formula. You just go down the whole list. And I think for the white house to think that this is not a substantive real-life problem is a sign of how totally out of touch with everyday normal Americans they are. And I think it’s an enormous problem.

I think that comment tells you everything about why the big government socialist model is failing and why the Democrats just don’t have a clue. Here’s a guy who’s extraordinarily wealthy, wind surfs off cape cod, goes around the world in a private plane from four star hotel to four star hotel eating gourmet restaurant after gourmet restaurant and then he doesn’t quite get it that if you’re a hard working single mother or single father and you’re out here every day and you can barely afford to pay for the gasoline to get to work, that maybe you’re not sympathetic with the ultra-rich. And I think this is a real challenge for the Democrats because they basically are shrinking into two groups, left wing cuckoos like AOC and people who are so wealthy they have no connection to the real world. And those two groups get together, and they reassure each other. But out here for the rest of us, we just did a survey where we asked how important is it to restore the America that works? 87% of the country, almost 9 out of every 10 Americans said restoring the America that works is really important. And that tells you that almost 9 out of 10 Americans do not think America’s currently working. And guess who’s in charge of not working? Joe Biden.