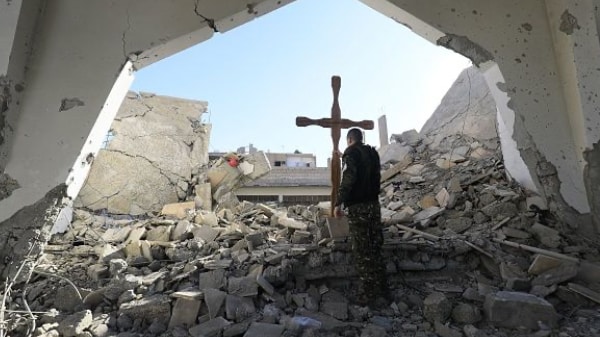 In the United States, the right to worship freely is often called America’s first freedom. It is a necessary component of U.S. foreign policy and our commitment to creating a more peaceful world.

History has shown that governments and societies that champion religious freedom are safer, more prosperous, and secure. Our commitment to protect this fundamental human right is both a moral necessity and a national security imperative.

On June 2, the U.S. Department of State released the 2021 International Religious Freedom Report. The more than 2,000-page report is a comprehensive, fact-based account of nearly 200 countries and territories around the world that is made publicly available for use by all guardians of religious freedom, including governments, religious communities, and activists.

For more than two decades, the International Religious Freedom Report has been an essential tool for the United States to advance and defend the universal right to worship freely.

Under the International Religious Freedom Act of 1998, the State Department is required to submit an annual report to Congress detailing the status of religious freedom in countries, government policies violating religious beliefs and practices, and U.S. policies that promote religious freedom.

As former Secretary of State Mike Pompeo previously said of the report, “Its very existence is evidence of our strong resolve to defend human dignity.”

First, discriminatory laws and policies are used by foreign governments to abuse their own people. For example, excessive prison sentences and home raids target people of faith in Russia, the Taliban and ISIS-K threaten and attack religious minorities in Afghanistan, and the Chinese Communist Party is committing genocide against the predominantly Muslim Uyghurs and other religious and ethnic minorities.

Second, the report found that the rise of intolerance and hatred in societies fuels violence and conflict. According to the U.S. Commission on International Religious Freedom, record-high levels of antisemitic incidents took place in Germany and the United Kingdom in 2020. In a separate report, the Commission stated that 82 percent of Jews in Sweden, 85 percent in Poland, 86 percent in Belgium, and 95 percent in France said that antisemitism is a “very big” problem.

Lastly, the partnership and collaboration among members of civil society, governments, and multilateral partners have been important to making progress in advancing and defending religious freedom.

The Special Watch List designations included Algeria, Comoros, Cuba, and Nicaragua. As I previously wrote, the administration removed Nigeria, but in the wake of the ongoing violence, it should be redesignated as one of the world’s most serious violators of religious freedom.

The Biden administration’s updates to these designations, which have yet to be released, will be watched closely by religious liberty advocates and perpetrators of persecution alike.

Tragically, as evidenced by the latest International Religious Freedom Report, religious oppression is a daily reality for millions of people of faith around the world.

The United States plays a consequential role in exposing these atrocities so that violators of religious freedom can be held accountable. America will not sit back as people are targeted, punished, and persecuted for their faith.