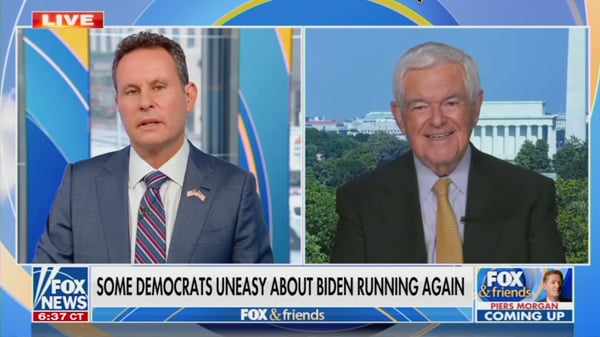 They are not just desperate. Remember from, their standpoint, all the issues that really matter doesn’t matter what Biden is doing. They are desperate to guarantee the right to have a tax paid abortion on the last day of the birth. They’re desperate to impose radical values in second and 3rd grade. They are desperate to keep the border open. I mean, this is a very issue oriented rather than personality oriented movement. And they look at the Republican’ potential victory and it scares them. Because the Republicans are going to stand for less government. Less inflation. Controlling the border. Locking up criminals, a tragic story we just heard a few minutes ago. I think on the left, there is a sense that this could be the moment they really do start getting defeated as a force in America.

Politics is a tough business. People are allowed to do anything they can to win. Within the law. And, if you figure out that you can help nominate somebody that’s easier to beat, that’s, you know, that’s your right. But it’s very dangerous. Because, in fact, in a lot of these cases, they are going to nominate people who they really deeply dislike but who are going to win. And they are going to govern based on their values not based on money from the democratic party. So, I have a hunch that whether it’s Dr. Oz winning in Pennsylvania or J.D. Vance winning in Ohio, there are a whole number of places people who are really populist and really against socialist big government are going to come out on top this fall. And the left sitting there thinking what happened? How can could this have happened?

Well, I think they are in a different position. Every week that goes by, Donald Trump’s presidency looks better. Look at his inflation rate, look at the price of gasoline when Trump was president. People find his I think his personality too aggressive and at times too annoying. But his policies certainly had turned America around. And in Biden’s case, he doesn’t just fall off his bicycle, he takes the country him with him. And you look at Biden’s inflation record which is worse than Jimmy Carter. Look at Biden’s open door policy in the southern border. Biden’s allies releasing murderers. A lot of reasons why the country on policy grounds would favor Trump over Biden and the latest poll I link was like 6 or 8 points.