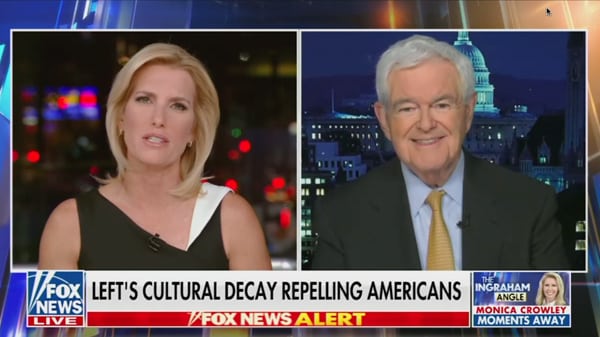 Look, that bill is crazy. No Republican should be for it. And as many Republicans as necessary should guarantee it will be filibustered in the senate and never leave. That is the kind of bill which gives the Washington bureaucrats the ability to impose on local parents and local families radical values. And I’m frankly astonished that any Republican would agree to cosponsor that bill and I think it is an open invitation to further creating totalitarian left-wing mindset where they are going to tell us how we think how we behave, how does what we are allowed to do. It is totally wrong. I was shocked to discover it was introduced and I certainly hope that the handful of Republicans who are currently cosponsors will withdraw their names and I hope folks back home will call them and demand that they withdraw their names.

Of course, it’s racist. Most of the racism in America today is on the left and frankly replacement theories a total lie. Virtually all of us favor legal immigration. Virtually all of us agree with Reverend Martin Luther King Jr., who said it is the content of our character, not the color of our skin. Virtually all of us know that the bike tipping over in Delaware is a pretty good reflection of that way the entire federal government is tipping over. We just did a poll where 87 of the American people just said that they wanted to restart the America that works. And I think that is what ultimately is going to create not a red tsunami but a red, white, and blue tsunami as you see Democrats, Republicans, independents, all coming together because things simply aren’t working. You look at the price of everything. You look at the problems on the border, you look at the George Soros effort to create a pro criminal class of district attorneys. Every time you turn around, you realize the left represents an America that will fail and the only answer to that is the American people.

You know, Lincoln said that we wanted to preserve government of the people by the people and for the people. The elites don’t want to anything to do with that. The fact is that the rebellion you’ve seen in this country has been a rebellion against the elites and the fact is that Donald Trump was produced in part because the Washington elite failed. When he announced for president, 65% of the Republicans in the country disliked their national leadership. That is why the national leadership could not win the presidential nomination. Ron DeSantis is a great example. He’s a hard-hitting, hard-working very successful governor who is making life better for the people in Florida. Compare that to New York or Illinois or to California.