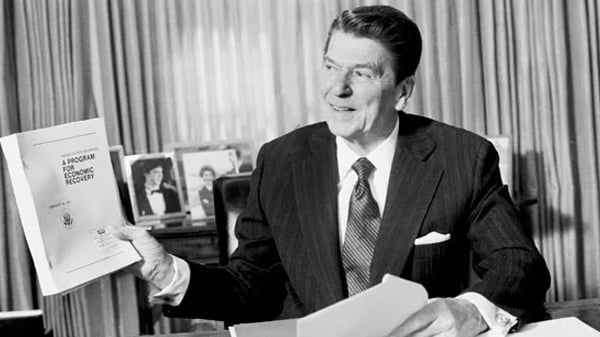 Americans suffering from rising prices and the highest inflation in 40 years need to demand the results Presidents Ronald Reagan and Donald Trump gave them.

Americans suffering from rising prices and the highest inflation in 40 years need to demand the results Presidents Ronald Reagan and Donald Trump gave them. They need to reject the policy failures of Presidents Jimmy Carter and Joe Biden.

Washington Post columnist Catherine Rampell recently gave us a perfect example of leftwing reality denial when she wrote, “Republicans demagogue about President Biden’s supposed ‘war on fossil fuels’ and socialism. Neither party has a serious plan for dealing with inflation overall or gas prices specifically.”

Given the history of the Reagan and Trump administrations, it is hard to believe that a columnist at a major newspaper could be so misinformed about the real world.

Consider the facts of inflation first.

When President Carter was in office, the inflation rate grew out of control. In fact, the inflation rate grew so high U.S. Federal Reserve Chairman Paul Volcker had to raise interest rates to high levels. President Carter’s destructive energy policies combined with a weak foreign policy led to so much inflation the Fed funds rate reached a peak of 20 percent in June 1981 (with the commercial prime rate reaching 21.5 percent). Compare this with the 1.75 percent Fed funds rate and 4.75 percent prime rate today.

Of course, the big difference in interest rates is that Chairman Jerome Powell and the Federal Reserve are well behind the curve in trying to slow down or stop inflation. Because President Carter let things get so out of control, the unemployment rate grew to over 10 percent in the 1980-1982 recession.

President Reagan backed Chairman Volcker’s anti-inflation policies but combined them with a tax cut and regulatory reform policy which increased the incentives to create American jobs and mop up the surplus money with new goods and services.

In effect, President Reagan had endorsed the supply side economics of Jack Kemp, Art Laffer, Jude Wanniski, and Larry Kudlow. (I was a junior member of this band of revolutionary enthusiasts who believed you could beat inflation by mopping up the money supply with more goods and services.) Kudlow a generation later would carry this doctrine into the Trump White House to profound effect.

The result of the Reagan supply side policy was a dramatic decline in inflation and unemployment. Consider the facts of the historic record. Under President Carter inflation shot up from 6.3 percent in 1977 to a peak of 12.4 percent in 1980 (then Reagan defeated Carter by the largest electoral college margin against an incumbent President in modern history).

With Reagan’s leadership, the inflation rate dropped to 10.4 percent in 1981 and then averaged 4.4 percent for the rest of his two terms. Unemployment followed the inflation rate down, and by 1988 was about half of what Reagan had inherited. The economy grew year after year, and Reagan ran for re-election in 1984 on the theme of “Morning in America.”

The sound, pro-economic growth, supply side policies were reinforced by an American energy independence drive which dramatically increased American oil and gas production – and brought the price of gasoline down to $2.11 a gallon the week of the 2020 election.

President Biden came in and promptly gave up on all the policies which had worked. Big Government Socialism is anti-energy, anti-sound money, anti-small business, anti-investment, and anti-job creation. The Left’s words sound good, but the results of their policies are terrible.

Given the history of the Reagan and Trump years, Republicans can campaign with confidence this fall that they know how to bring down the cost of gasoline and diesel fuel, how to bring inflation under control, and how to encourage job creators in both big and small businesses to invest, invent, and flourish.

Sorry Rampell, your fantasy version of history is just wrong. Your promise that Republicans will be as dumb and destructive as Democrats is just historically inaccurate. A brief course on the economic and political history of the last 50 years might help you understand why Democrats fail on inflation and fuel prices and Republicans can campaign with confidence this fall.