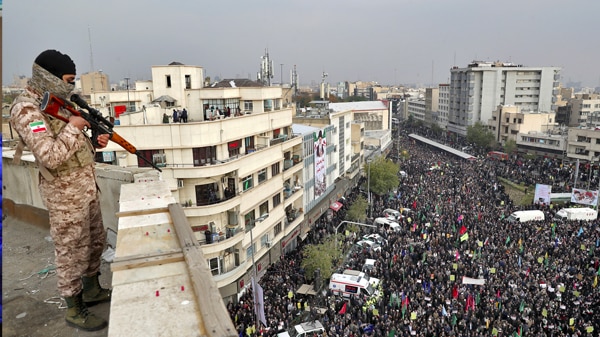 We must stand in solidarity with the Iranian people and respect their right to self-sovereignty.

We the people. These three words are essential to who we are as a nation. The United States holds values of freedom, democracy, and self-sovereignty to be of utmost importance.

History to the present day has reminded us that the freedoms we may take for granted are considered a privilege in other nations. On Feb. 11 1979, the course of history took a turn for the Iranian people.

The Ayatollah was able to appeal to several opposition groups and unite an audience which shared his views to instill a theocratic regime and overthrow the shah in Iran. Once the shah was overthrown, the Islamic Republic of Iran was established.

To this day, the Iranian people continue to live under the rule of an oppressive regime which remains hostile to the United States.

There have been several major protests in which the Iranian people have strived to have their voices heard in the face of injustice. In 2009, mass demonstrations occurred across the country following Mahmoud Ahmadinejad declaring victory in a highly controversial presidential election.

The rallies included a slogan of “Where is my vote?” resulting in an uprising known as the Green Movement. Unfortunately, the Obama administration did nothing to acknowledge these protests or show support for the Iranian people. The lack of American support contributed to the failure of the Green Movement protests to gain international traction, which helped the Iranian government successfully suppress the dissidents.

Security forces have been utilized to arrest thousands of protestors, use lethal force, and imprison protesters on illegitimate charges to silence dissenting voices. One notable example was in 2019 when hundreds of protestors mobilized in Isfahan – Iran’s third largest city – to draw attention to water shortages in the country. In response, Iranian security forces targeted protestors with gunfire and tear gas.

Iranian citizens from all walks of life have been protesting the current regime for years, including the past three years specifically. Since recent protests erupted on May 6, Iranian authorities have disrupted internet access for dissenters in multiple provinces – though the government has denied these claims.

Reza Pahlavi, the son of the former shah, also called for unity among Iranians on his Twitter account in response to ongoing protests. Crowds have called for an end to the Islamic Republic, with protestors chanting “death to the deceitful government.” Protestors also burned pictures of Iranian Supreme Leader Ayatollah Ali Khamenei and chanted how they did “not want the rule of the clerics.” Social media footage has depicted intense clashes between protestors and law enforcement, where police fired tear gas and live rounds against protestors.

While the protests may have been sparked by a declining economy, the overall focus of the protests has shifted politically to call for an end to the Islamic Republic.

The Iranian government has also reacted by categorizing the protests as small gatherings, while state media has labeled protestors as “rioters.” In addition, Iranian authorities have blamed the ongoing protests on foreign adversaries, which are supposedly “spreading rumors and lies.”

Efforts to gather further information in the country remain challenging since Iran has disrupted internet communications in certain regions and has instituted several restrictions for international journalists. Consequently, Reporters Without Borders ranked Iran as one of the worst countries in the world for press freedom.

On June 23, former U.S. Vice President Mike Pence visited Iranian dissidents in Albania to support the protestors’ efforts for a democratic and secular government in Iran. The former Vice President called for the Biden administration to withdraw itself from the stalled Iran Nuclear Deal negotiations.

Pence is right: The Biden administration needs to give up the possibility of the United States re-joining the Iran Nuclear Deal, since it would only empower the current untrustworthy regime.

Widespread oppressive actions taken by the Iranian government could potentially lead to another humanitarian crisis in the Middle East and result in Iranians fleeing their homeland. Domestic instability could spread beyond Iran’s borders and further intensify regional conflicts within the Middle East.

We must stand in solidarity with the Iranian people and respect their right to self-sovereignty. Turning a blind eye to the protestors’ demands will only play into the hands of the current authoritarian regime, which continues to deny basic freedoms to its own citizens.

Whether we realize it or not, our foreign policy stances reflect on the values we hold most dearly as a nation.

Pooja Patel is an undergraduate student at Georgia Tech from Atlanta, Georgia. She is a research intern at Gingrich360.