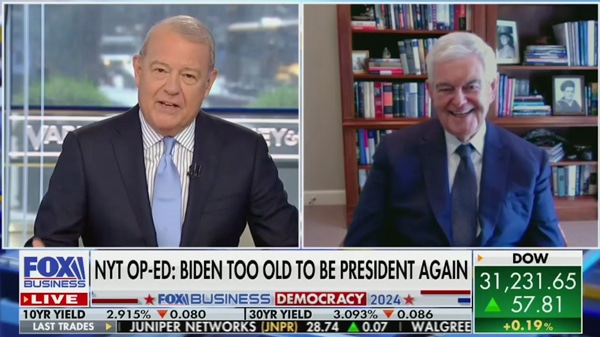 I’m not sure they have a front runner. But remember if we had this conversation at this point in 2014 and I said to you I think Donald Trump will be the nominee you would have thought I was crazy. You can’t look this far out; you could have a celebrity star decide to run. If you look at the remarkable achievement of top gun Maverick, he might well become the democratic candidate. This is a wide open world in which people can emerge from nowhere. I’m serious and I would disagree with you a little bit, I think Gavin Newsom is automatically dangerous, because he does have the largest state, he has the kind of fundraising capability of a governor of California, and as seen by left-wingers he’s not that bad, you and I think he is nuts, but that means to a normal left-winger that he must be normal. Inside their party he might do very well and then be crushed in the general.

I think between 25 and 70. You can’t have the highest gas prices in history, rising murder rate, rising food prices, open border, just go through the different things that are going wrong, try to figure out how Democrats is going to come back to that. And the issues they want to campaign on, they completely misread, what happened in the democratic party is it has become essentially a religious cult, they get in a room and talk to themselves. Let me give you an example. A substantial majority of Americans favor some limitation on abortion. Hardline Democrats believe abortion on the last day paid for by the taxpayers perfectly reasonable. If they want to wage the fight on abortion at least they say they do, they will be in a 35% minority. And you get this again and again. The elitist environmental groups want high gasoline prices, they want to tell people we are going to sacrifice your life, your income, your family future on some theoretical model while the average American thinks that’s nuts. So, there is a pretty good chance I saw that Kevin McCarthy posted a record fundraising for the second quarter, I think Republicans will go into the general election in both the house and the senate in pretty good shape. I think you are, virtually, you are never guaranteed in politics, but they are virtually guaranteed majority in the House and probably a pretty big one and more than reasonable likelihood in the senate.

It came out this morning and delighted that it is doing very well. I wrote it because this was a remarkable moment to make the case all these things that had gone wrong because the left is wrong, not because Biden is too old, not because Kamala Harris is weird, not because Pelosi and Schumer are beyond it but in fact what they believe is wrong. Ronald Reagan used to say it wasn’t what liberals didn’t understand that scared him it’s what they knew wasn’t true and what you have is a chance not just to defeat the candidates but to defeat the basic ideas which from Lyndon Johnson to Jimmy Carter to Barack Obama to now Joe Biden have consistently come back to dominate the Democrat party and it’s the ideas we have to defeat, to ensure for the next few generations we’re not back having the same fight again.