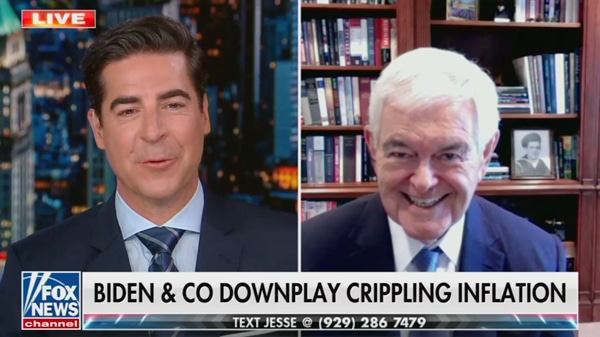 No. Look, I don’t think they have a clue what causes inflation. I think that they are part of a religious cult about energy. So, it’s better to go to Saudi Arabia than it is to go to Texas. It’s better to go to Iran than it is to go to Oklahoma. And it’s better to go to Venezuela than it is to go to western Pennsylvania or eastern Ohio. I mean, ask yourself why would an American president prefer oil and gas from anywhere as long as it’s not America? And why would you take oil out of the American strategic reserve and send a million barrels to China to a company that your son, Hunter Biden happens to have relationship with. All this stuff is nutty. And at 9.1% inflation, I thought that was a breaking point. When you start getting up in that range, when you showed a few minutes ago with people in the street, people can’t afford what’s being done to their paycheck, what’s happening to their savings. These are very profound, you know, Kamala Harris can be glib about it, I mean, she is living in a government house, riding around in a government car, flying in a government airplane, everything she needs is taken care of by the government. She wants the rest of us to somehow economize while they keep spending more and more money on their allies. The unions, the big cities, and illegal immigrants all of whom of course get a free cell phone because, after all, you wouldn’t want them to be in America without a cell phone. So, we are now giving illegal immigrants a free cell phone. You can’t make this stuff up.

The Obama phone I think went with Obama care. I don’t think the illegal immigrants — these must be brand new Biden phones. Not quite sure what you are dialing and not quite sure who is answering.

Well, look, I mean, first of all, I think that they have a passionate dislike of the American oil and gas and coal industries. So, anything which would strengthen those industries cuts at the heart of the radicalism in the democratic party. But all of this is essentially — I can’t overstate this; this is much closer to a religious cult than to a traditional political viewpoint. They change reality to fit their narrative. They adopt policies. For example, why don’t we release more criminals? We have more people getting mugged, raped, and shot. Isn’t that a surprise? What did you think was going to happen if you release more criminals. Went through a whole series of these things, part of why I wrote defeating big government socialism. This isn’t a set of accidents. These are beliefs that these people have that have never worked. They didn’t work for Lyndon Johnson. They didn’t work for Jimmy Carter. They didn’t for Barack Obama and they are certainly not working for Joe Biden.