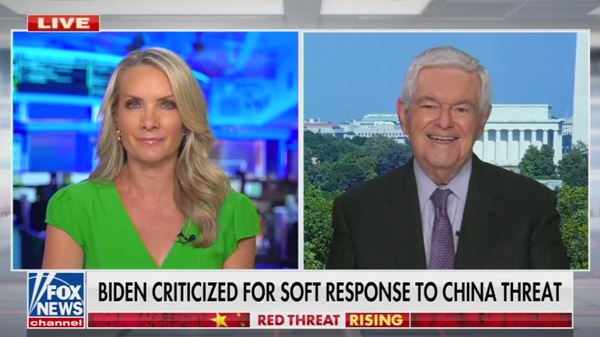 Let me point out, first of all what a total lie it is to suggest that China is doing anything on climate. They are building the largest number of new coal plants in the world, they’re the largest user of coal in the world, The objective fact is they do nothing on climate unless it’s to their economic advantage. They have chosen cheap energy over climate. This kind of stuff is bologna. Second, they are the producer of fentanyl, which is killing thousands of Americans, we should be really angry at China, we ought to understand that. Xi Jinping is up for election for a third term and wants to replace Mao, the leading Chinese dictator. He is shaken, he can’t conquer Taiwan. Nancy Pelosi visiting directed reminded the Chinese that Taiwan is still independent and I suspect it is a frenzy and they don’t know what to do and we ought to act one by doing what the admiral has says and make Taiwan a porcupine, providing it every defensive weapon it needs to knock down Chinese aircraft, to sink Chinese ships, to make it impossible to invade the island and then two we should remind China they are vulnerable, we should not be sucked into only focusing on the Taiwan straits. They have vulnerabilities off Shanghai, they have vulnerabilities off Hong Kong, there are a lot of things the United States and allies can do if the Chinese really want to get tough.

I think the Biden administration is trapped between on the one hand the sort of Hunter Biden relations financially and openness to China, they’ve actually softened our policies with China from where trump was. On the other hand, the dictatorship of Xi Jinping is very aggressive, and every time we give them an inch and they try to take a mile, I think Biden has a huge problem. First thing he ought to do is call for an emergency increase in appropriations for the U.S. Navy, for first time since 1939, we are not going to be capable of dominating the seas because we are not investing in new ships, the Chinese are, and they are actually now a formidable competitor. The first thing we should do is rebuild our own capacity and the biggest difference when I went in 1997, Bill Clinton and I had worked closely together on a China policy that was very tough. He didn’t have aircraft carrier to east of Taiwan, he sent two aircraft carriers through the straits of Taiwan. Let me tell you if a U.S. Carrier battle group right now ignore the Chinese missiles and Chinese maneuvers and just sailed right through the straits of Taiwan, it would be soberings moment for the Chinese dictatorship.