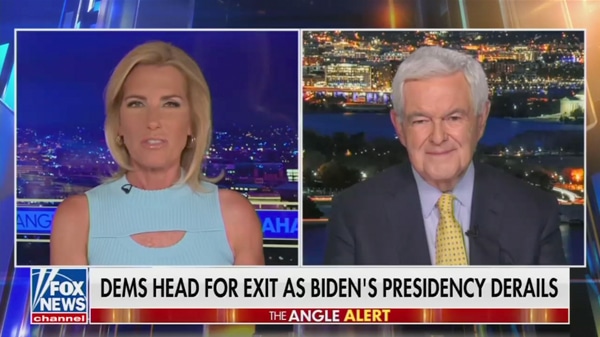 Oh, sure I think if you look at this most recent monstrosity proposing 87,000 new internal revenue service agents that’s more than we currently have total so more than double the IRS agents. These people don’t hear anything. They don’t understand that Biden is in trouble, but it think the whole democratic party model is in trouble because they are so radically out of touch with the American people, and they can’t deliver on daily life on goods and services. My personal guess is that Biden will run not run and that Harris won’t run, that neither of them will find a level of support necessary to sustain a nationwide campaign in 2023.

Look I mean part of the reasons why I wrote Defeating Big Government Socialism is that their underlying belief system for example. If you’re really hard left, if you’re Buttigieg for example you never done anything seriously, you bicycle around. He is happy to have the American people in pain overpaying for gas because he thinks that’ll drive them into electric vehicles which they also currently can’t afford. If you look at the murder rate the people that George Soros is electing are happy to release murderers back on the street. I just saw a New York state senator, democratic senator who said that the men who’d been put in women’s prison because there were transgender and know now been caught rating women shouldn’t be prosecuted because they are women too. Now if that’s your belief system and that’s the world you live in, open borders are fine you just having a couple million people coming in although even for the mayors of Washington, D.C., and New York there’s beginning to be so many illegal immigrants out there complaining that is literally unmanageable. I think you’re truly hard left, all of this is acceptable because it’s for this greater mythical belief systems so much a religion. It’s a secular religion.

It’s crazy. We just watched a French national election in a French national election was with paper ballots and they were reported that night. Something profoundly wrong with the way that we approach all of this I think it be interesting tomorrow to watch because the other counties that they were counting by a pretty good margin, and I’m think they were supporting either. So, who knows what the final numbers is going to be sometime tomorrow. And you are right it is crazy that they can’t just get this done.