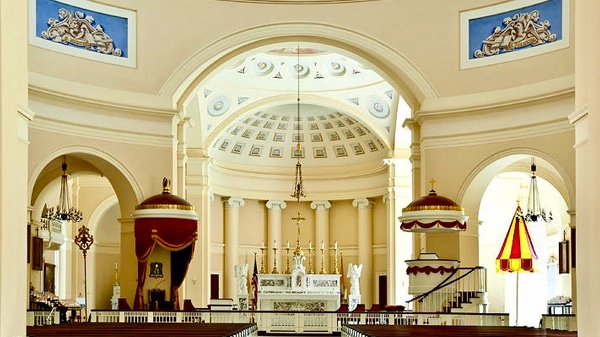 More than 200 years ago, on July 7, 1806, the cornerstone of America’s first cathedral was laid in Baltimore, Maryland. Today, the Basilica of the National Shrine of the Assumption of the Blessed Virgin Mary, commonly called the Baltimore Basilica, stands as a representation of America’s history and commitment to religious freedom.

Following the adoption of the U.S. Constitution, America’s Catholics, who had been persecuted for more than a century in the colonies, sought to build a new cathedral where they could freely worship.

Instead of building the Basilica in a Gothic Revival style that was popular at the time, Bishop Carroll opted for a modern, neoclassical design to reflect the architecture of the new, national capital of Washington D.C.

According to Jack Waite, principal architect for the Baltimore Basilica’s restoration project in the early 2000s, Bishop Carroll and Latrobe’s collaboration was “actually extraordinary and very important because John Carroll wanted a symbol for the Catholic Church that would look to the future and would be a symbol of the importance of the church in the United States.”

Upon its completion in 1821, the Basilica was the most architecturally advanced building in the United States.

The Baltimore Basilica was designed to be flooded with light, with clear windows, a white color scheme, and a wooden double-shell sky-lit dome. It was Jefferson, an accomplished architect, who proposed the structure of the dome after being struck with inspiration during a trip to Paris.

The Basilica became the site of many historic milestones for the Catholic Church in America.  During the First Provincial Council of Baltimore in 1829, the need for Catholic schools was declared at the Basilica and later, during the Third Plenary Council, the Baltimore Catechism was commissioned there.

In 1877, the founder of the Knights of Columbus, Blessed Michael McGivney, was ordained at the Basilica, followed by the ordination of the first African-American priest in the U.S. in 1891.

In 1937, the Basilica was elevated to a minor basilica by Pope Pius XI, declared a National Landmark in 1972, and designated a national shrine in 1993.

Over the years, the Baltimore Basilica has been visited by Saint John Paul II, Saint Teresa of Calcutta, and Ecumenical Patriarch Bartholomew I of Constantinople.

As George Weigel, biographer of Pope John Paul II, said, “No other Catholic edifice in America can claim to have seen so much history made inside its walls.”

For this reason, the Basilica of the Assumption Historic Trust was incorporated in 1976 to protect, repair, and restore the renowned Baltimore Basilica.

However, throughout the centuries, significant alterations were made that changed the look and feel of the Basilica. Stained glass windows replaced the clear windows, dark paint was added to the walls, and dark marble covered the floors.

In 2004, to restore Bishop Carroll and Latrobe’s original vision for the Basilica, Cardinal William H. Keeler and the Trust undertook a more than $30 million 32-month-long restoration project. Funded by the generosity of private donors, the project also built a chapel in the undercroft, overhauled the infrastructure of the basilica, and made it handicap accessible.

Today, more than 100,000 visitors come to the Baltimore Basilica each year to experience the beauty, history, and splendor of America’s first cathedral.

As the Most Reverend William E. Lori, who serves as Archbishop of Baltimore and Chairman of the Trust, said, “The Basilica stands today as a shining reminder of our nation’s unflagging commitment to religious freedom and serves as the cradle of the Catholic Church in the United States.”

Please join the Gingrich Foundation by making a gift to the Basilica of the Assumption Historic Trust and supporting its mission to maintain, preserve, and restore this important historic and religious landmark for years to come.