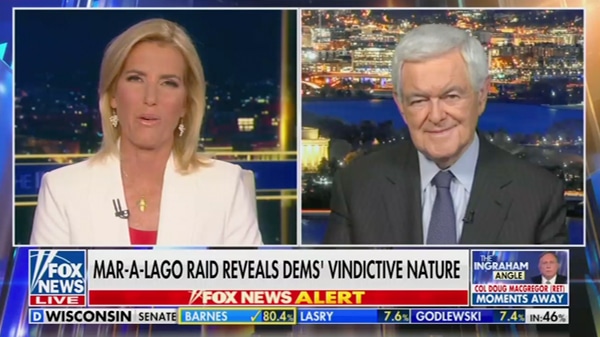 Well, first of all, if you want to talk about new fascist, there would be 30 FBI agents entering the home with no particular reason, it would be the FBI picking up a college professor at national airport and deliberately walking him in chains to the airport to humiliate him. It would be basically replacing the FBI with the German secret police as the appropriate title. I am happy to have a debate with people like max Boot who are apologists for a failed anti-American establishment which has year after year failed the American people, failed to defend our interest, failed to win wars failed to reform bureaucracies, failed to educate our children, people like Max Boot, are the representatives of a dying system, as it starts to die it grows more disparate. And you saw last night is the desperation of a regime that knows they are on the edge of being eliminated. And I think that we will see more desperation in the weeks to come.

I think that they are actually more bolshevism than fascists. But I think clearly first of all under the constitution and the idea of separation of powers, by what right does the, and I say this is a former speaker of the house, I’ve been through this, by what right does a member of the executive branch come into a legislative branch of elected officials into his home and take his phone. I mean, that is act frankly of destroying the American constitution right there, and I increasingly agree with Mark Levin who says that we are edge of the post-constitutional America. And I cannot overstate for viewers as a historian and speaker of the house and somebody who has watched this for literally my entire lifetime, we are on the precipice of a group of truly evil people who are prepared to destroy the constitution and the rule of law, and who are approving it every day and we have to quit applying to them the kind of questions that would apply to normal people. These aren’t normal people, they are liars, they are bad people, doing bad things, and they are going to do more bad things until they are stopped, the way to stop them is the election this fall. The constitution will still work if the American people will show up and throw out all the people who are trying to establish what is basically a dictatorship of the state against the American people.