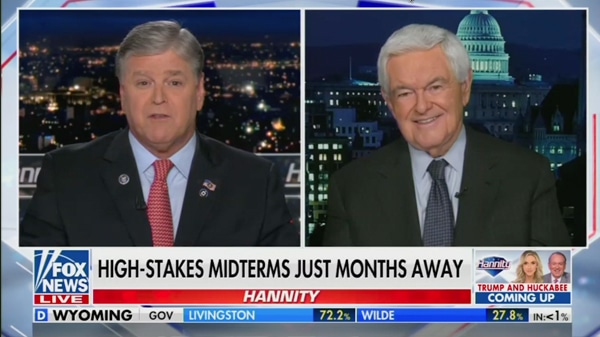 Look, Fetterman is not only the most radical democratic nominee for the senate in the entire country, let’s be clear: Fetterman’s policies on crime, which have been consistently to release violent criminals in places like Philadelphia, which is having a huge explosion in murders and robberies and rapes. Fetterman is going to I think perform far worse than a normal Democrat because he is so clearly pro-criminal. In the western part of the state, which is the fourth largest energy producer in the United States, his policies against natural gas would in fact kill about 600,000 jobs. I think men at Oz’s job is pretty straightforward. Make clear to the people of Pennsylvania how radical Fetterman is, how much he would kill their economy, and how clearly Oz would work in every single county in the state to create, to create public safety, and to give people a better future. I was born in Harrisburg; I have relatives all across central Pennsylvania. I think I’ve got a pretty good sense of the state. I do not believe in the end that Fetterman will win, because I think that he is not just radical. He is destructive of the state of Pennsylvania. We would be a much poorer state if Fetterman wins. We would be a much more dangerous state with criminals left loose if Fetterman wins, and I think Pennsylvanians aren’t going to vote for that kind of policy.

I think it’s beginning to happen. I wish McConnell was more committed to an issues-oriented, values-oriented campaign. That’s not his personal style. But at the same time, it is Rick Scott’s style, and the fact is, let’s take just the example of 87,000 additional IRS agents. You go into Arizona, you ask the average person in Arizona, would you rather have 87,000 more people on the border working to control the border or would you rather have them as IRS agents investigating you and your small business, et cetera? I think overwhelmingly they are going to think that Mark Kelly was crazy to vote for the IRS agents instead of voting for the border. I think you can go by item by item around the country and these are all national issues. The things I just mentioned about Fetterman, the issue of natural gas is going to affect, for example, senator Hassan in New Hampshire because she is in favor of much more expensive heating oil and much more expensive gasoline.