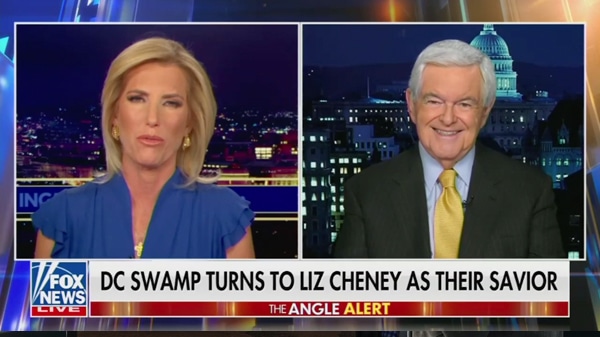 No, Liz Cheney is a fantasy being developed by the elite news media. But the truth is we saw in Wyoming where people rendered judgment. You can’t get 29% of the vote and turn around, she compared herself to Abraham Lincoln, who, by the way, got 53% of the vote for the senate, but because the state legislator made the choice Douglass won, but Lincoln got 53% vote, did not get 29. I think that Liz has no future. She can run around the country. She has $7 million in the bank of political money. She can feel good, “The New York Times” will love her, “The Washington Post” will love her. I’m sure that the ABC CBS, NBC, CNN, MSNBC, they will all love her, but the country won’t love her. And she told us clearly last night how totally biased the January 6 committee is when she said she would do anything to stop Donald Trump. Now how can you have a vice chair of a supposed committee who says up front, I will do anything to stop him, now let’s have a hearing. It just proved the hypocrisy of what she has been doing.

First of all, we have a majority of governors, a majority of the state legislatures. I think we are about to win a sweep in the house and senate. We have probably the most unique political figure in modern times. You know, Donald Trump has actually won the nomination fight more than anyone in American history. And of the ten people who voted to impeach him on the Republican party, eight of them are gone, including Liz Cheney. So, I mean, no other political figure in American history has had the reach that he has. Now, she is correct, if what you are looking for is an old-fashioned pro-war pro-establishment Republican who does not really represent the people. But remember, if you believe in government of the people by the people and for the people, Wyoming spoke and spoke decisively, and Liz Cheney wasn’t on the winning side.

Look, I actually agree with her. I think the crisis today between the deep state establishment and the bureaucracy, the fact that they are now using the government as an instrument of power to terrorize people, to lock up people, to intimidate people, I think we are in a real crisis. And I think the debate over the next few years is going to be the most important debate since the civil war. The difference between Liz Cheney and the rest of us is, most of us believe that the American people ought to govern, not the bureaucrats. That the values of America should be reinforced, not the values of woke organizations. When we have things like the Milwaukee teachers union that wants to fire white’s first. Pure absolute racism. I think that there is going to be a huge fight, and I think that they are going to lose.