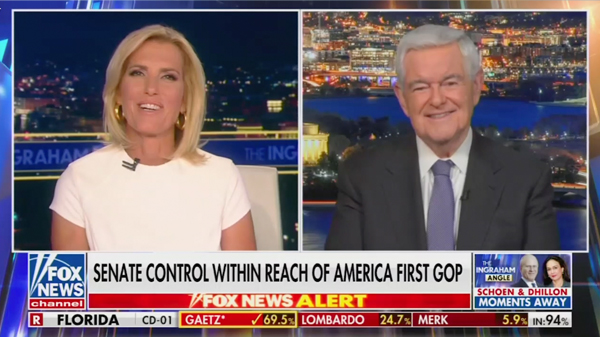 Look I have known Charlie Crist since he was a Republican state senator in 1984 at the Reagan convention in Dallas. I think that Charlie would be a great model for a Broadway play that was a music comedy because his whole life is amazing, I mean he was a Democrat, Republican, he’s independent but he has huge staying power, and Ron DeSantis needs to beat somebody by a big margin. And I think Charlie is a perfect example, and I think Ron will come out of the Governor DeSantis will come out of the general election with probably the biggest margin in modern times for a Republican and this is a pretty good base for him to be thinking in the long run about a national career. And Charlie Crist, he says he doesn’t exist. He’s pure ego. He has no political stance, he has no platform that matters, he has no values that matter, but he is a very likable very energetic very persistent guy. And he obvious can raise enough money to win a primary. It’s fun, it’s not serious and Ron DeSantis is the next governor.

She seems to be a responsible and nice person. But first of all she is going to be part of the Biden campaign team, she is never going to get out from under Biden, so it will be the Biden/Demings race. And I am sure that Rubio’s people are good enough they will make that really clear. Second she is really in the position of Beto O’Rourke. Remember Beto O’Rourke is the magic person who is going to beat Ted Cruz, he raised an enormous amount of money more than I would have thought possible. And he collapsed totally. Because in the end, I mean how is she going to explain that she was in Washington, she did vote for all these crazy things, she cannot defend any of them, she is, in fact, a Biden Democrat. Because everybody who is running this year is a Biden Democrat. And in the end that’s going to crush her, so Mark Rubio is a great, great U.S. Senator who I think will in fact will go on to win the election again probably by one of the surprisingly biggest margins. Florida used to be a very closely fought state, but I think between DeSantis and Rubio we are going to start seeing big margins in Florida.