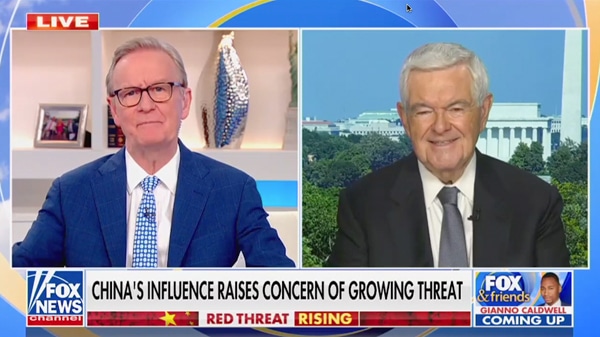 I’m surprised they didn’t just say no. The Chinese have invested a great deal in trying to create an alliance they signed an agreement with the Solomon Islands. Remember, it’s both the place where we fought Guadalcana the big comeback in the pacific in World War II. But it’s also only 1200 miles from Australia. So, a Chinese military base in the Solomon Islands would be seen as a very real threat. That’s part of why we fought over it with Japan in 1942. I think what you are seeing is the weakness of the Biden foreign policy in the sense that America is a weak country. If you are a little tiny place in the south pacific and the Chinese show up with enough money and they offer a chance for you to, you know, play with them, and you watch the Americans who look weaker and weaker, you can sort of see the trend. It’s very dangerous. I’m sure the Chinese after our visits to Taiwan went overboard to try to get the Solomon Islands to sort of snub the Americans but it’s a serious situation. The Australians take it very, very seriously as a direct threat to their own defense and we should take it seriously as a signal, you know, China is now — you look at a map. It is a long way to Guadalcana which is where the will capital is from China and tells you how much they are beginning to extend their power base and trying to basically dominate the western pacific.

Yeah, you have to ask yourself, you know, if you are the Solomon Islands — by the way their parliament building was actually built by the United States. If you are the Solomon Islands you have Australia to your south, you have the United States historically protecting you since 1942. Who is he signing a security pack against? It’s pretty clear signing against Australia and the United States. It’s — now the Solomon Islands have a very shaky political system, so it’s possible that this guy will be out of office presently and that somebody new will come in that is more pro-American and pro-Australia. It is a serious signal that in large parts of the world we are losing ground to China, and we normally don’t cover it unless something happens which affects an American ship but there’s a gradual erosion in Africa. There is a gradual erosion across the Middle East as the Chinese flex their economic muscle and they are very willing to pay huge amounts of money to get people’s attention. Meanwhile we have state department timid and not very competent. This is a signal we have a real challenge ahead.