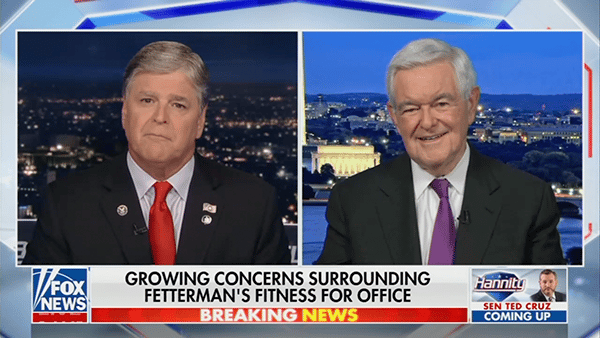 I think this is a very clear case, even if Fetterman were healthy, how’s he going to defend his record? Biden came to Philadelphia to give a remarkably hateful speech last week. Philadelphia is on the way to setting a record with a number of murders, carjackings, armed robberies. 70% of Philadelphians say that crime and safety is their number one concern. Fetterman voted by himself on 25 different occasions to release murderers who nobody else on the parole board thought they should’ve been put back on the street. Fetterman has called for releasing one-third of all the criminals in Pennsylvania this is during a crime wave in both Philadelphia and Pittsburgh. As you point out, Fetterman has called for moratorium on the natural gas industry, which is about 600,000 jobs in western Pennsylvania. He can’t come out in the open and debate. Even if he was healthy, he couldn’t defend his record. He is going to try to be clever about Dr. Oz, he’s going to try to have cute things to say, but he can’t defend his record. And I think in the end, he’s going to lose by a surprising margin, because in the end he is really dangerous, both for the people of Pennsylvania and the people of the United States.

First of all, I’m not sure if you included New Hampshire. I would certainly include Colorado, Washington state, and Connecticut. I don’t know what planet Nate Silver is on. Remember the elites have always been wrong, and they are particularly wrong at the end of August. Because every August, the news media goes crazy, runs polls that are stupid, and then asks us to believe the numbers. I learned this the hard way. For example, my good friend, John Engler who was supposed to be 19 points behind on Saturday, and won the governorship of Michigan on Tuesday. They didn’t change by that big of margin. The liberal newspaper ran a funny poll. So, I talk to people in detail, Oz is clearly close to winning, J.D. Vance I think is clearly going to win in Ohio. I think we have real shots in every state I just mentioned. Hassan in New Hampshire is the weakest democratic senator running for reelection, if you look at the underlining numbers. We have in Tiffany Smiley an amazing candidate in Washington state, with an astonishing personal story. We have in Joe O’day somebody who is a great business leader, and who is already within a point or two of defeating Bennet who is a very boring Washington-based Democrat. My advice is really simple: Every Republicans should put the word “Biden” in front of their opponent, so it’s the Biden Warnock ticket, it’s the Biden Fetterman ticket, it’s the Biden Kelly ticket and make sure that everybody understands these people are all part of the same machine, they are all for the same radical ideas, they all brought us the same high prices, they all brought us the same rising crime rates, they all brought us the same government spending, they all brought us the same open borders. And I think if you run that, as you pointed out earlier, you pick up Kevin McCarthy’s concept of a contract with America. Which I’ve been studying and working with him on. I am very impressed with this. Much more sophisticated than we were in 1994, and I agree with Rick Scott. If the senate would pick up the same theme and both the Republicans in the House and Senate were for positive things, we would have a big victory this fall.