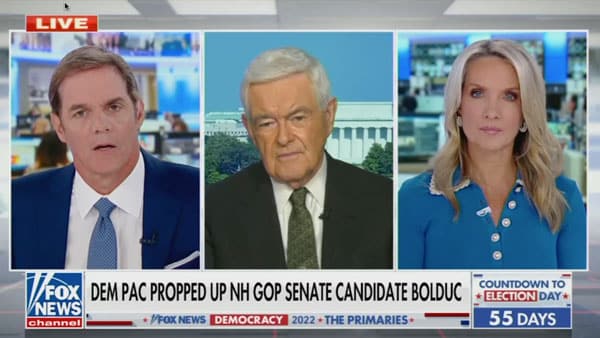 Well, you know, it’s interesting in terms of the hypocrisy of President Biden’s Philadelphia speech and his vicious, hateful attacks upon what he called MAGA Republicans, Democrats turn right around and in several states have spent money trying to help nominate what we would call conservative or MAGA Republicans. Purely as a political tactic which makes you wonder if they’re that afraid of them how come they keep helping nominate them. The big thing to me in New Hampshire, in both in the house race you reported on and in the senate race, the anti-establishment candidate has done amazingly well even with a lot less money. The establishment candidate in the senate race had over $4 million spent by an outside group trying to defeat general Bolduc who by the way started in the army as a private and worked his way up to being a general. I think he built a huge statewide grassroots network. I think senator Hassan in every poll is the weakest Democrat in terms of reelection numbers in the entire country. So, I think there is a very real likelihood that general Bolduc is going to be the next senator from New Hampshire.

Well, I think the big thing is the larger reality that you were reporting on earlier. If you have food prices going up 15%, if you have inflation out of control, if you have the establishment answer to inflation putting Americans out of work and deliberately causing a recession, if you have the stock market dropping over 1,000 points, how does senator Hassan go home and say this is working. And I think that frankly will outweigh virtually all of the Washington political chatter. Back home whether it’s crime in Philadelphia, in Atlanta, or it is the problems of immigration in Arizona, or it is inflation everywhere in America. And remember, in New Hampshire they start filling up their heating oil tanks in early October. When they get hit with the sticker shock for what the Biden Democrats have done to the cost of heating oil, I think that senator Hassan is going to have a very hard time winning.