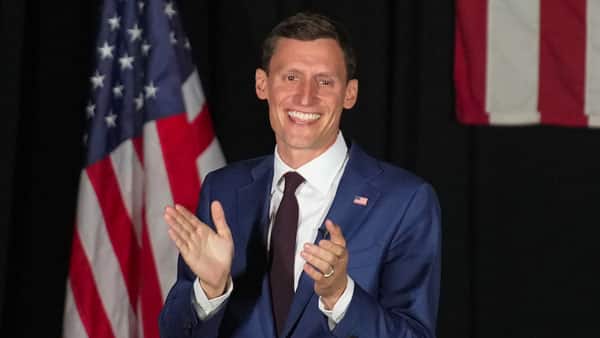 When the people of Arizona learn that Mark Kelly represents Washington and the Biden administration – not Arizona, I am confident Blake Masters will be the next senator from Arizona.

Despite all the talk in Washington about Arizona’s U.S. Senate race, I predict Blake Masters will defeat incumbent Democrat Sen. Mark Kelly by a surprising margin.

No one in the left-wing establishment or the propaganda media wants to look at the facts on the ground in Arizona.

First, Arizona is a much more Republican state than Washington’s so-called experts think it is.

The most recent Emerson poll has President Donald Trump three points ahead of President Joe Biden. The same poll has the governor’s race tied at 46 percent for each candidate – despite the Republican having come out of a deeply divisive primary. Finally, Emerson has Kelly barely ahead at 47 percent to 45 percent.

When an incumbent senator is only two points ahead of a challenger who just came out of a tough primary, it is clear the incumbent is vulnerable. Furthermore, an incumbent who cannot get above 50 percent is even more vulnerable. James Carville once said a well known incumbent gets whatever their final poll number is, they don’t get any of the undecideds. If that is true, Kelly will likely lose 53 percent to 47 percent.

However, I think the margin of defeat will be bigger.

The issues all cut against Kelly – and most all Democrat incumbents.

While the Democrats are desperately hoping fervor over the U.S. Supreme Court’s Roe v. Wade ruling will save them, the fact is a substantial majority of Americans favor some level of limits to abortion (usually 15 weeks). They also oppose partial birth abortion, tax-funded abortion, and abortion for sex selection purposes (which tends to be anti-female). It is the Democrats who are the extremists on abortion, and every Republican who makes that clear is going to do fine in that fight.

The announcement this week that the inflation rate remained devastatingly high at 8.3 percent hurts every American family. Most people simply can’t maintain their standard of living with what is essentially an 8.3 percent pay cut. Furthermore, high inflation rates hit senior citizens living on fixed incomes and the poor especially hard.

When the U.S. Army is announcing it is advising its lower paid soldiers to go on food stamps, you know the system is breaking down. This has not happened since the Jimmy Carter administration’s inflation.

Kelly is further hurt by inflation because most voters think the spending bills he has been voting for increase the inflation rate. The so-called Inflation Reduction Act is seen as a bad joke by most Americans because they think it actually increases the inflation rate with its massive increase in spending.

The U.S. Federal Reserve’s Commitment to push America into a painful recession as an anti-inflationary measure was reflected by the immediate drop in the stock market (which further hurts 401ks and retirement savings that people have worked so hard to set aside).

So, just like the Carter years, Democrats such as Kelly own a painful economy their party created that they can neither defend nor solve. Their desperate answer will be to launch hateful, divisive attacks on Republicans. They can’t solve anything, so they have to attack.

The flood of illegal drugs and crime crossing the border from Mexico – and the growing cartel violence which dominates northern Mexico – create a sense of insecurity and fear which the Washington elites simply can’t understand. They just don’t feel the pressure 2,300 miles from Phoenix.

For example, when Vice President Kamala Harris said on NBC’s Meet the Press that “the border is secure,” it was so clearly false the New York Post editorialized that she was telling “bald-faced lies.” The border may seem secure to Harris in an NBC studio in Washington D.C., but it sure doesn’t seem secure to anyone living in Arizona.

Remember that Kelly voted 94 percent of the time with the Biden-Harris administration – despite the administration’s complete dishonesty about the border, crime, inflation, and so many other things.

This leads to Kelly’s greatest vulnerability.

Since January 2020, there have been an estimated 847,000 people illegally crossing the Arizona border from Mexico. (This only includes those encountered by U.S. Border Patrol and does not count the several hundred thousand who avoid all contact with authorities). In Fiscal year 2021, there were 312,000 encounters. In July alone, there were 42,000 encounters (plus those who avoided authorities).

This steady flood of people illegally entering the United States is clearly more than the current members of the Border Patrol can handle. They need help.

When given the chance to help the Border Patrol, Kelly refused.

I am confident Blake Masters will be the next senator from Arizona.