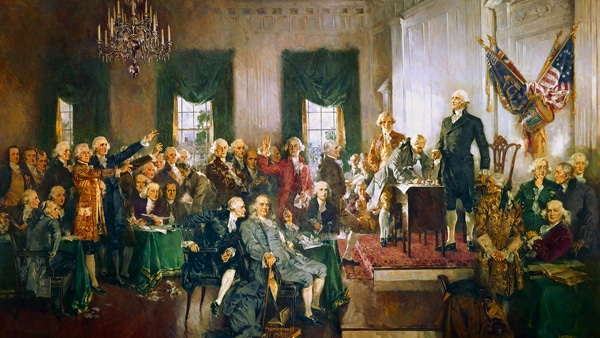 In Philadelphia 235 years ago today, 39 delegates to the Constitutional Convention signed the U.S. Constitution. Eleven years had passed since the Declaration of Independence was adopted, and this historic event marked an important milestone for our remarkable experiment in self-government.

The signing of the U.S. Constitution was the symbolic reward for years of toil and bloodshed in the Revolutionary War. It signaled to the world that the principles of freedom, liberty, and representative government would prevail. In a more practical sense, it was the official start of our new nation’s government.

For more than 200 years, states and local governments recognized Constitution Day in various ways. It has been called “I am an American Day” and “Citizenship Day.” However, it was not federally recognized until 2004, when former Senator Robert Byrd offered the Constitution Day amendment to the fiscal year 2005 Consolidated Appropriations Act.

Along with officially observing Constitution Day nationwide, this amendment mandated that all federal employees receive training materials on the U.S. Constitution when they begin public service – and each year on September 17.

This educational requirement is vitally important, but it has not been enough to preserve our Constitution and history. Unfortunately, we are doing a poor job of teaching the next generation of Americans about our nation’s founding, our core principles, and the brave men and women who forged our exceptional country.

As some forces in America seek to revise and reimagine our history – and teach our children to denigrate and condemn our nation’s founders – these trends will only get worse.

Those of us who understand the importance of our nation’s past must work to cure this historic amnesia and find better ways of sharing our American story.

This is why we produced and filmed “The First American,” our award-winning documentary about the life and legacy of General George Washington.

Washington was indispensable to America’s founding. Without his military leadership in winning the Revolutionary War and his political leadership in forming our republic, there would be no U.S. Constitution – or United States of America at all.

Our other Founding Fathers held Washington in the highest regard and knew that his sense of morality and honor transcended politics or personal ambition. There was a reason Washington commanded the Army for eight years, presided over the Constitutional Convention, and served two terms as the first President of the United States.

Studying Washington and his life will help Americans young and old gain a more complete understanding of the principles and ideals on which our nation was founded – and a deeper appreciation for why we celebrate Constitution Day.

the 21st anniversary of 9/11, we remember the nearly 3,000 lives that were lost in New York City, Washington D.C., and Somerset County, Pennsylvania at the hands of 19 al-Qaeda terrorists.

At 8:46 am on September 11, 2001, when the first plane crashed into the North Tower of the World Trade Center, terrorists struck both our homeland and the very heart of our nation.

Yet, even on one of the darkest days in U.S. history, and the compounding tragedy, devastation, and loss, we were reminded of the courage and strength of the American people.

As President George W. Bush said, “Today our nation saw evil – the very worst of human nature – and we responded with the best of America.”

The determination to confront any crisis and overcome great challenges defines who we are as a people and a nation.

Each year, we pledge to never forget the precious lives that were lost on September 11, 2001 and to honor their memory.