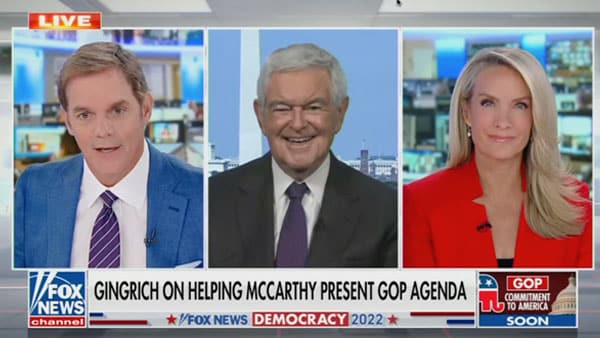 Well, I helped President Reagan then candidate for the first capitol steps event for the contract in 1980. Then we did one in 94 that led to the first house majority in four years. This is actually a bigger more complete and more sophisticated effort. Kevin McCarthy over a year ago asked his members to form seven working groups. They have produced at their website, Commitment to America dot com, they have I think over 150 specific pledges. I think it is ironic that Nancy Pelosi would talk about it as extreme. If you think locking up criminals is extreme, if you think controlling the borders is extreme, if you think energy independence is extreme, if you think stopping inflation is extreme, then you are probably left-wing Democrat. But for most Americans these commitments are going to be powerful, they are going to be real. I was with the Republican conference yesterday, enormously wide commitment by the members. I really was very, very impressed how many understood this is a commitment for governing, not just for campaigning. It is a huge, historic step in the right direction.

I think it was truly historic. It grew out of Reagan, and someone said about 80% of the contract of America was in Reagan’s 1985 State of the union. So, welfare reform, balancing the budget, the only four balanced budgets in a lifetime came out of the Republicans in the house. And I think in that sense, we were consequential. I think what Kevin McCarthy is trying to do and what I saw yesterday with his members, he is succeeding. He is laying out a platform for governing, not just a platform for campaigning. And that’s what we did, the first elected majority in 40 years, the first reelected house majority since 1928. And so, that was because people saw we kept our word. And I think that McCarthy as speaker is going to lead his party as will Steve Scalise, the majority leader and the other members of the leadership team, I think they will lead the Republican party in the house to keep its word and for Biden to choose. And Biden’s right. Fox and Friends just had pictures of gigantic tent city that is being built in New York for people that Biden is letting across the border illegally. I think the American people want to change the trajectory, they want to stop the murders. They want to stop the rising prices. They want to get back to Independence and energy. I think that the commitment to America that the house Republicans are launching provides exactly the kind of things that the American people would like to replace the current failures with. Truth is and you know this the two of you, when you go to the grocery store, you know it ain’t working because it’s too expensive. I paid $5.05 a gallon of gas last Saturday and it’s not working. It’s too expensive. You watch the evening news and see the local murder rate. You know it’s not working. That is why I think this will be a much bigger Republican tsunami than people expect.

Sure. Look, he is the inevitable speaker, he has spent the time, he has built the organization and he’s developed the commitment and raised the money. I think he is ready. I think he will be a very, very effective leader, and he will have to be strategic leader to do what we did with Clinton. Which is maneuver so that the American people got Clinton to sign welfare reform, sign a balanced budget, sign tax cuts. Those are not things liberal Democrats wanted but Clinton saw his future required him to do it. Biden will place the same choice next year. And I think McCarthy is the right person to have too, frankly, maneuver against a very left-wing White House.