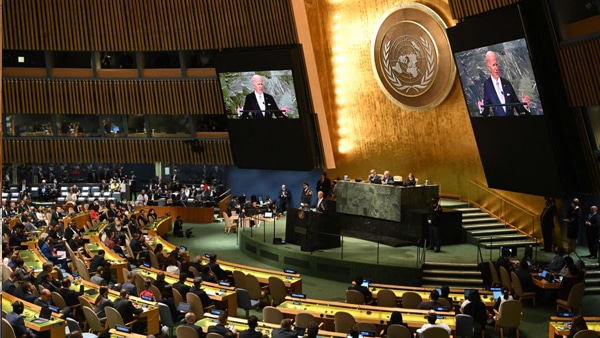 From September 19-23, world leaders convened in New York City for their largest annual gathering, the High-Level Week of the 77th session of the United Nations General Assembly.

Every year, the General Assembly meets from September through December to discuss, debate, and make recommendations on some of the most important and consequential issues facing the world. These include topics such as development, human rights, and international peace and security.

The General Assembly is the most representative body of the UN, with each of the 193 members having equal voting power. Among its responsibilities, the General Assembly elects members of UN bodies, appoints the secretary-general, approves the UN budget, and censures states in violation of UN Charter principles.

The General Assembly debates begin as countries are faced with numerous global challenges, which, according to UN Secretary-General António Guterres, “threaten the very future of humanity and the fate of our planet.”

The War in Ukraine, one of the most devastating global issues, was a central focus of discussion. As Russian President Vladimir Putin threatened to use nuclear weapons and called up 300,000 reservists to military service, leaders from around the world explicitly criticized Putin’s horrific aggression against Ukraine.

In a prerecorded address, Ukrainian President Volodymyr Zelenskyy said on Wednesday, “Russia wants to spend the winter on the occupied territory of Ukraine and prepare for a new offensive.” Zelenskyy also declared that Ukraine, “will not let this entity prevail over us, even though it’s the largest state in the world.”

In President Joe Biden’s remarks, he condemned Putin’s “brutal, needless war” and declared that, “Russia has shamelessly violated the core tenets of the United Nations Charter.”

Other nations also voiced their support for Ukraine, including British Prime Minister Liz Truss, who delivered her first major speech on the world stage as prime minister. Truss affirmed in her remarks to the General Assembly that Putin, “is desperately trying to claim the mantle of democracy for a regime without human rights or freedoms.” She added, “We will not rest until Ukraine prevails.”

Further, on Thursday, the Group of Seven — Foreign Ministers from Canada, France, Germany, Italy, Japan, the United Kingdom, and the United States — and the High Representative of the European Union issued a press release voicing their condemnation of Russia and unified support for Ukraine. The G7 pledged to “pursue further targeted sanctions and are committed to sustained economic and political pressure on Russia.”

As more than 765 million people were chronically hungry around the world in 2021, the food security crisis was also an important issue addressed at the meeting of G7 Foreign Ministers and the High Representative.

Earlier in the week, the Global Food Security Summit was held and co-chaired by the United States, the European Union, the African Union, and Spain, and was co-hosted by Germany, Colombia, Nigeria, the European Commission, and Indonesia. Held on the sidelines of the General Assembly, the Summit was convened to discuss the rising challenge of hunger and the compounding factors that augment this crisis.

As General Assembly President Csaba Kőrösi said in his remarks to the 77th session, “We live, it seems, in a permanent state of humanitarian emergency.” He added, “The challenges are great. And they are interconnected,” however, “they are not insurmountable.”

Although the United Nations General Assembly has faced criticism for being overly bureaucratic and ineffective, it is a forum where shared challenges are brought to the world’s attention, and where the voices and contributions of women and developing nations are heard.

The 77th session of the United Nations General Assembly gathers at a consequential moment. The discussions, debates, and dialogues that take place will impact and shape how nations can work together to face global challenges.