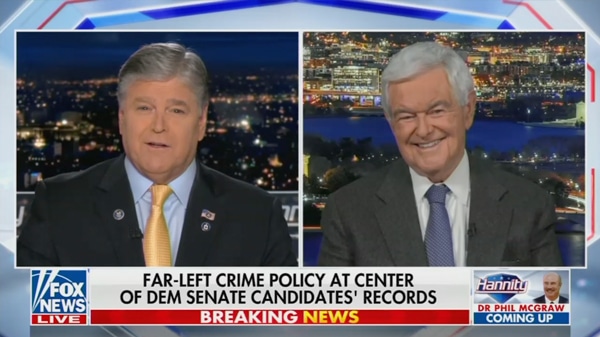 Well, not just Alaska but take New Hampshire is another example. I think that Mitch’s professional team made a decision that they would try to defeat some of the pro-Trump candidates. They lost to the best of my knowledge in every single fight. I think it’s a sign that you know money in the end is not as important as votes. I know it’s hard. The Washington press corps love to talk about money. But the truth is in the end Kelly is a good example. So are other candidates across the country who survived despite the Washington establishment whether it’s McConnell or others trying to dictate to them. I have to say Sean tonight, I am particularly excited because despite every effort of the left wing media, we have 2 polls in Georgia in the last 24 hours. Emerson shows Herschel Walker despite every lie of the left being within 2 points of winning. And we have a brand new poll coming out from Trafalgar showing him within 1.5 points of winning. It’s what you and I believe in. There is a populace movement out there that can see through the lies and see through the money they can see through the elites. Across America from Georgia to Alaska, they are making a huge difference.

Well, let me shock you for a minute. As an old friend. Who you were right. You were there on election night ’94. It was a great historic moment. I don’t care. What they need to know is that Raphael Warnock votes 96% of the time with Biden. Raphael Warnock believes in tax paid abortions on the last day of the ninth month. Raphael Warnock believes in keeping the border open so illegal immigrants and fentanyl and Mexican cartels can come to the U.S. I think when they get to that debate, I hope that Herschel takes the high road. Stays on the big issues. Because that’s what people care about. People are scared. Atlanta has per capita as high a crime rate as Chicago. People in Atlanta are frightened. They know that Raphael Warnock is a pro-criminal, anti-police left winger. And I think to the degree that Herschel Walker drives those facts home he will win by a margin that surprises people. The reason I mentioned you earlier about both the Trafalgar and Emerson the polls. Despite solid 10 days of the entire national media smearing Herschel Walker, in Georgia where people are thinking about it go let me get this straight I have a guy who is honest, and I got a guy who I think is a left wing crook. I will still stick with the guy I believe in.

Well between plus 3 and plus 5 for the Republicans. I agree with everything you said. I want to drop a couple of things in there. When the former democratic vice mayor of Philadelphia endorses our good friend Dr. Oz and he said the crime is so great, I can’t stay with Fetterman. That’s a real rocket. And frankly when you see somebody to continue to move in the right direction. I think in New Hampshire when senator Hassan has to explain what is about to happen with the cost of the fuel oil this month, I think she will be gone. I think he will win the race. When you go further west. I think that probably our best candidate in terms of pure preparation is Adam Laxalt, who is doing an amazing job. Everyone I talked to, I had a report today in Seattle people are telling me that liberals in Seattle are saying that Tiffany Smiley and so courageous and clear. Her husband who lost sight in both eyes in the war and came back to be the only sightless officer in the U.S. Military. And the jobs she’s done representing veterans. People say Murray is tired and she is exhausted. I think that will be a great pick up come election night and Blake Masters just annihilated Mark Kelly in the debate because Kelly could not explain why he voted for 87,000 IRS agents and voting against any additional agents for the border.