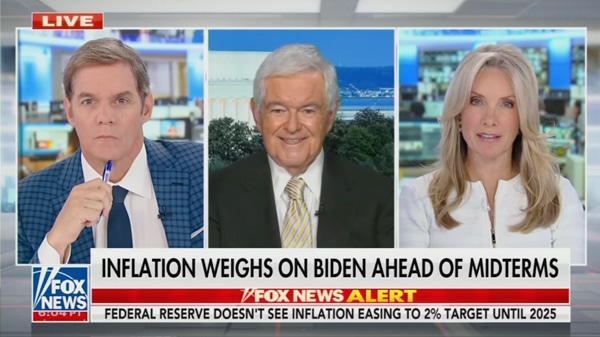 Newt Gingrich, former house speaker. Thanks for coming back. ABC, “Washington post.” The number one issues among Americans and voters. Economy at 84%. That to chew on. In the face of this inflation number. Not a lot of time to make up for something like that when election is right around the corner.

Well, the problem is a man who works with me came in yesterday morning. He stopped by the pickup four hot dogs and paid over $7 and was just saying you aren’t going to be able to sell this to the American people. I think Gallup has reported the largest Republican advantage on the economy since 1946, which was a landslide for the congressional Republicans. I think that the average American knows every time they go to the gas station, California is projected may get to $8 a gallon because it’s the most expensive gas in the country because of state laws. Every time they go to buy something at the grocery store, every time they deal with supply chain getting something for their house, this ain’t working. Joe Biden and the Democrats bear the burden. They have the house, senate, White House and it ain’t working. I think personally I think you will see a tsunami. Virtually everybody who is undecided will break for the Republicans. If you’re a Democrat and below 53 or 54%, you are very likely going to lose come election day.

Interesting that president Biden told Jake Tapper this week he thinks that Republicans don’t have anything to run on. Listen to this.

You think Democrats have something to run on?

What’s the Republican platform to run on? What are they for? They want to put social security on the chopping block every five years and the other leader comes along and says no, every year up for grabs. Medicare, Medicaid. These aren’t negligent able items in terms of whether you’ll continue them or not.

How should Republicans respond to that?

Look, I carry around with me Kevin McCarthy’s house Republican commitment to America. You can go to commit to america.com. There are 150 specific policy proposals, many of which Joe Biden would not like to see get to the white house desk but the American people would like it. So, to suggest that Republicans don’t have something to run on. Senator McConnell, the senate Republican leader and Rick Scott have both endorsed the concepts of a commitment to America. I think there is a huge gap between the failure of the Biden team, the failure of the Democrats, and the fact that all they have left is to attack and frankly lie. They lied about Afghanistan, they’ve lied about the economy, they’ve lied about inflation, they’ve lied about the border. So of course, they will lie about Republicans. That’s the hallmark of their campaign.

It almost feels every day you can sense the election shifting a little bit. You may be right. You could see the tsunami you talked about. Go ahead.

Well, Bill, the way I’ve lived through a series of these, 1974, 1980, 1994, 2010, starting around labor day, the momentum starts growing and growing and growing. The reason is doesn’t matter what the TV ads say or what you and I say, people who are out in their own lives, they experience the failure and they finally say, whether it’s watching crime on the evening news, being afraid to go on the subway in New York, as people now tell me they are, the whole process, people in their own lives. This is why, frankly, Herschel Walker will win and oz is going to win. 70% of people in Philadelphia say crime is the biggest issue. They are losing them on crime, they are losing them on the board are and 100,000 Americans dying from drug overdoses as fentanyl pours into the country. They are losing them on the fact Kamala Harris to go on television to say the border is secure is a joke. People — it’s a tragic joke. You saw this happen in the debate in the senate in Ohio where Tim Ryan was talking about the rape of a young girl and Vance pointed out she was raped by an illegal immigrant and Ryan voted against controlling the border time after time. If the illegal immigrant wouldn’t have been here she wouldn’t have been raped. People have the sense stuff is all out of control. They can’t tell the truth about it and they’re young up on things like transgender issues when most of us want our kids to be safe, go to a school that succeeds. You saw yesterday the worst results on college tests in 30 years. So, I think people generally think the system is not working right now.

Mr. Speaker, thank you. 26 days to go. We’ll be in touch with you and looks like things look good for the Republicans now. See if there are any other October surprises.