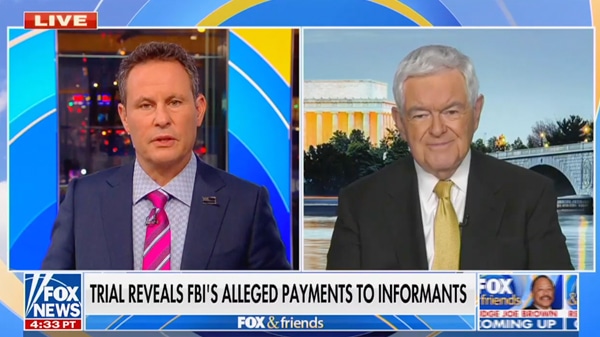 Look, I don’t know what will happen in a jury trial like that, but I think it’s very clear from the evidence that’s been unearthed that the FBI at the very top had gone crazy. They are doing things; how can you go out and actively try to undermine the president of the United States as they did just as they went out to protect Hillary Clinton and they went out to protect Hunter Biden. This is the most corrupt FBI leadership in American history. And there is going to have to be a commission or something to look at it and potentially it’s going to have to be broken up into two or three different agencies. This is real serious stuff. These guys have the power to put you in jail. It’s not politics. This is the criminal justice system, and it was clearly perverted by the last two FBI directors.

I think you can go back all the way to the investigation which I think illegally put Dick Cheney’s aide in jail when he was totally innocent, and when they knew he was innocent. They knew who actually leaked the CIA agent’s name. It was the number two guy at the state department. They told him to keep his mouth shut. They went after Scooter try to flip him against Cheney. And I think that’s under Muriel. So, you have to say that there has been a tradition here of the senior FBI leadership being anti-republican. Anti-conservative. And corrupt. I mean, doing things that are clearly totally dishonest.

Well, I think that’s been a very important investigation and I think the new Republican congress is going to use this as a baseline to really seriously dig into what’s gone wrong and why is the FBI so sick?