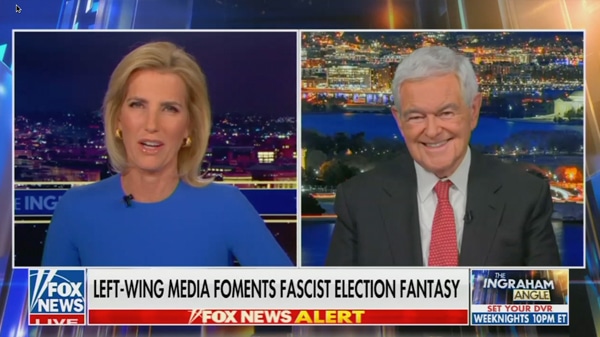 Look I think the democratic party is breaking into two wings. One is weird and the other is insane. And from their standpoint, given what they believe in, a Republican victory is an unthinkable, horrifying thing. We might control spending we might return power to the people. We might go for oil and gas independence. We might lock up criminals. I mean, we might actually expect schools to teach kids. There are number of horrifying things if you are a true left-winger that we might be in favor of. So, I sort of understand the anxiety. The problem they have is that think they are doing is working. I just did a study yesterday when Joe Biden bought his most recent ice cream cone, it turned out that in the last 10 months, ice cream has got up 20%. He was the sort of personal personification of inflation coming down the street. Go through item after item. You know, you want more criminals on the street. You vote for Fetterman in Pennsylvania. Want to make sure that Biden continues to inflate the economy, you vote for Warnock in Georgia. You want to make sure that we have IRS agents but nobody on the border, you vote for Mark Kelly in Arizona. All this stuff is coming home, and that’s why the next three weeks you will see I think you will see the Democrats grow more and more panicked.

Look the left despise middle-class hard-working everyday Americans. The left has this fancy idea that somehow if you are not American, you are terrific. We ought to have an open border. Come join us. But if you are a hard-working American who pays their taxes, loves their country, willing to volunteer for the military, you are somebody that the left despises. That is far beyond just Trump or not Trump. I think we need to be honest about the scale of the cultural fight that we are in. These are people who I meant what I said earlier. They range between weird and insane, and their ideas are nuts and I think we have to be prepared to stand up to that. I have a hunch we are going to win a huge victory in three weeks. And I think it is going to come as a great shock to the Democrats but it will be really good for America.