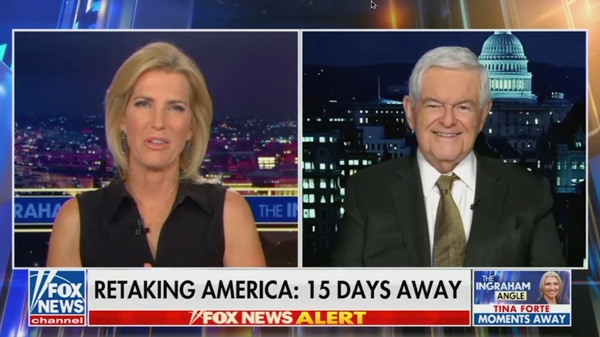 Well I mean it could be Masters in Arizona or Bolduc in New Hampshire. It could be Tiffany Smiley in Washington state, Joe O’Day in Colorado. I’m just sticking with Senate races. I think you are going to see Herschel Walker win in Georgia, you just had a great winner on from Florida where the Republicans in Florida will probably win the biggest victory for governor and senator in the history the state for the Republican party. I think you’re gonna see Dr. Oz win in Pennsylvania. J.D. Vance in Ohio. I think Ron Johnson is gonna run away with it. And probably the biggest Wisconsin senate victory in modern times for Republican, but what is happening you see it everywhere, you see in the most recent poll in Illinois where governor Pritzker is now in a very close race. You see it in Oregon, where the Republican is slightly ahead now. Every time I turn around I get another email from my good friend Barry Castleman in Minnesota just wrote me that we are now well ahead both for attorney general and slightly ahead for governor in a race that two weeks ago we were behind by ten points. And so there is a tide building across the country and it’s a combination of inflation, higher prices for everything, crime, an uncontrolled border, the whole crisis of drugs. And then this nuttiness about, ask yourselves this Laura because I think it’s so crazy, how could a white house two weeks before an election schedule a president to sit on with a tick-tik specialist who is going to a year-long transgender transformation and have the president say he is against any rules of any kind stopping children from getting involved in this kind of sex change process which is a wildly unpopular position. But how could you even schedule it? It tells you with white house is. You just have to ask yourself, they’re crazy.