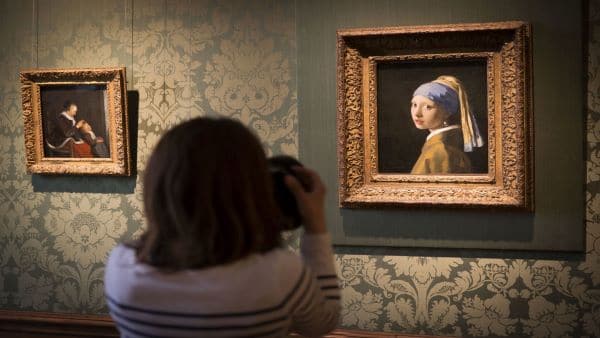 Another day, another historic masterpiece “souped” by climate protesters. On Thursday, Dutch police arrested three climate protesters associated with the group Just Stop Oil after they attempted to decimate Johannes Vermeer’s illustrious 1665 painting, Girl with a Pearl Earring which is displayed in the Mauritshuis museum in the Hague.

According to a video published on social media, one activist glued his own head to the glass protecting the painting while another protestor smeared the painting in tomato soup. Luckily, the museum has announced that the portrait was not damaged during the incident.

Only ten days earlier, other Just Stop Oil activists were arrested in London for gluing themselves beneath Vincent van Gogh’s Sunflowers and pouring tomato soup over the famous artwork. However, these are not the only victims of the tasteless food related protests. Activists have glued themselves to the frame of Van Gogh’s Peach Trees in Bloom, spread mashed potatoes on a painting by Claude Monet, and shown interest in tarnishing works by Pablo Picasso and other world-renowned artists.

One question emerges, will the actions of these tactless activists deny art-lovers across the globe access to their favorite pièce de resistance or is increased security necessary for renowned artwork across Europe?