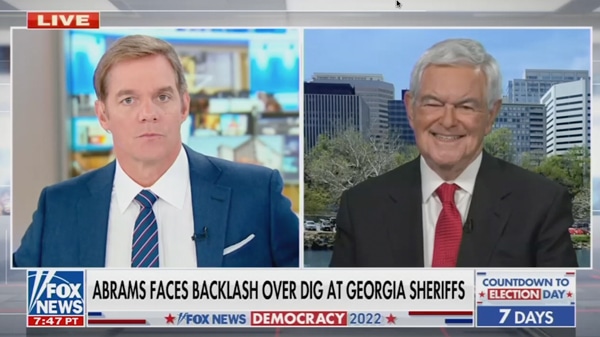 Let me say first of all, just for a moment, Callista and I have Paul Pelosi in our prayers. He has always been nice to us. Terrible what has happened in San Francisco, and I feel compelled following that report to just say we should all keep Paul in our prayers and hope he recovers fully. Look, Stacey Abrams — I tweeted about this. I’m working on a paper about the two wings of the democratic party. The weird wing and the insane wing. And she clearly is in the insane wing. Does anybody really believe that there are sheriffs who get up every morning hoping to arrest blacks and take them off the street? This is a kind of wild hallucination. I don’t think it is paranoia, I think it tells you about this alternative universe that Stacey Abrams lives in that has no relationship to the real world. It’s the same universe that said that she has never been defeated. The same universe to say they should move the all-star game away from Atlanta, which of course hurt minority-owned small businesses and may have cost $1 hundred million to small businesses in Atlanta. So, this is sort of typical. As the left disintegrates you see them getting wilder and wilder in their comments. You have the governor of New York claiming that the red states have worse crime than the blue states, which is just plain factually false. The kind of stuff where they can’t tell the truth, they can’t campaign on the issues, and they don’t have much left.

Oh yeah. Look I mean if Zeldin wins, I think he will, that is an amazing sign of how big the tsunami is going to be across the whole country. New York and California and Illinois are all three very tough states. Two of them now have close governors races, Illinois where the governor has signed — again, an insanely out of touch with reality bill to create no bail and put criminals back on the street even though virtually every district attorney and every sheriff and every police chief has opposed it. They don’t seem to be able to learn anything. And in New York City the question is how many people have to die in the subways, how many cars have to be carjacked, how many people have to be randomly shot for it to matter? The governor has all these comments on Sunday. Look at the shootings and the murders in Chicago this weekend alone. I think it was a 3-year-old, a 14-year-old and an 11-year-old were shot this weekend in Chicago. Now, if you are a normal, rational person you know that the cities run by Democrats are the most dangerous cities in America. And that’s just a fact. And we were just in, Calista and I were just in Minneapolis. Downtown Minneapolis is a disaster because again the anti-police left doesn’t want to lock anybody up and doesn’t want to hire enough police and they are shocked crime goes up.