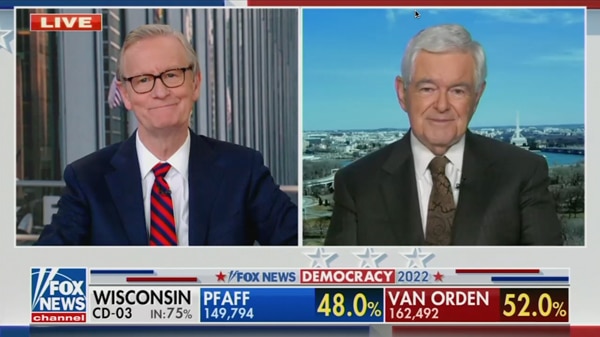 Yeah. I think, first of all, Governor Kemp, like many Republican governors, had a big night. Probably spent the end of Stacey Abrams career in politics. I think that Herschel did not get all the votes that the governor did obviously or that race would be over. So, it looks like it’s going to go to a runoff. Governor Kemp has a huge ability, I think, to influence that runoff. And this will be the second time that Warnock has ended up in a runoff. So, I don’t know what that says about how narrow the margins are in Georgia. But everywhere in the country governors had a big night. Kemp is an example. You look at the scale of the Republican governor victories. That’s something, you know, we did not do as well in the house and senate as I thought we would do and as I said on this show I thought we would do so there is a lot to study about what happened. We did very well with governors and in that sense a huge night for Republican government at the state level.

As I was surprised I thought with the inflation rate and price of food and price of gasoline with the crime rate that we have seen with the border as open as it is with some 4 million plus coming across illegally. I thought all of those things would have made for a really big Republican night. I have to say as much as I think it’s despicable the Biden strategy of demonizing Republicans and attacking Republicans and defaming Republicans, I think did have an impact and will probably become part of the definition of the democratic party.

I think Governor DeSantis is the single biggest winner of the night and almost certainly become the rallying point for everybody in the Republican party who wants to move beyond President Trump. Which would make for a pretty remarkable race. DeSantis did well and so frankly Marco Rubio who did almost as well and President Trump was in Miami with Rubio two nights before the Republicans swept Dade county, which, as you know, is unheard of. Governor Bush once did it. But other than that, Republicans have never had the kind of margin in Dade county that both Rubio and DeSantis got. I think DeSantis is the biggest single winner of the night and that’s going to resonate across the whole country. The Republican governors in general, like Governor Kemp, like Sununu, like Dewine, Abbott, all of them did very, very well last night.