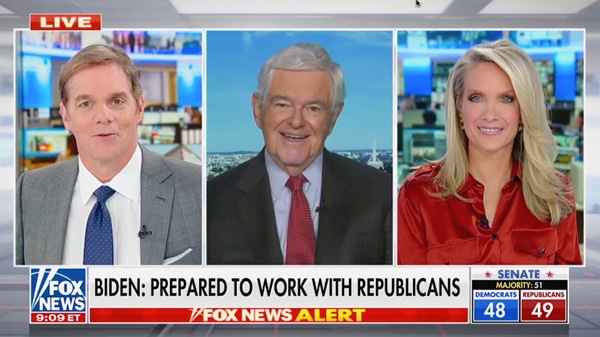 Well, I think a lot of this is going to come down to Governor Kemp. He won a very decisive victory. He has a big statewide organization. I think that he can be the margin to make sure that Herschel Walker comes from behind to win. Walker was in a number of games in overtime and managed somehow to I think win every overtime he ever played in. I don’t think he is particularly worried except he has to get those extra votes. I think Georgia is kind of ironic two cycles in a roar it comes down to runoffs in Georgia for who controls the senate. And I think that that will make this a very intensely competitive race.

Well, first of all I just wrote a newsletter at Gingrich360 today about Speaker McCarthy and I want to make the point that what really matters is transferring the gavel. The shift of power in the house from Pelosi to McCarthy will be decisive and people need to understand that. And she has governed with a four-vote margin, and she has passed trillions of dollars in spending and radical bills. So, I think people overestimate the impact, if Kevin ends up, as I think he will, at 226 or 228. Remember, we were at 230 but it was such a shock to have the Republicans take over in 1994. Bill Clinton was the opposite of Joe Biden. If you go back and listen to Clinton’s press conference the next day he said we’re going to have to change, we’re going to have to work with the Republicans. Nothing Biden said yesterday indicates he wants to work with the Republicans. He threatens to veto everything. He says he is not going to change any policies. Well, I think Republicans have to really look at why we didn’t do better. I certainly as you know was on this show. I was very optimistic about a red tide. But the fact is, when you look at the exit polling, 75% of the country says the United States is on the wrong path. Now what is Biden going to do to work with the congressional Republicans house and senate to get America back on the right path or does he ignore that 75% and set up a really consequential 2024 presidential race? The jury is out right now. And people are going to watch to see exactly how the city of Washington responds to signals sent from America.

No, I think as a historian you always have to say — you don’t know. At his age there could be a health problem. But I think the results of this election make it very unlikely that anyone can force him to not run. If his health holds up. Why would you give up marine one, air force one, the white house, the most powerful political job on the planet, why would you voluntarily walk off if you feel good? He is going to fight for re-election. I don’t know that’s an advantage for the Democrats. And it certainly sets up an opportunity for the Republicans to offer a very different vision of the future.