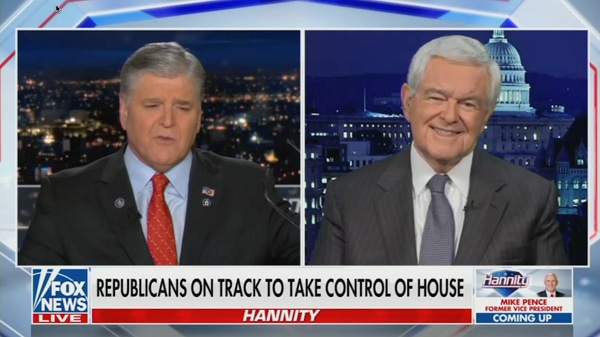 Well, I mean first of all, the Democrats were brilliant at targeting where to put resources. I talked two days ago with Adam Laxalt who said, you know, he was ahead and was matching the Democrat with advertising until two weeks ago and suddenly people decided he won, so they cut off his money. And she outspend him three to one in the last three weeks. You have to look at some of these key places. In the case of Bolduc, the candidate in New Hampshire, Mitch McConnell himself ran four million dollars in ads attacking Bolduc in a way in the primary that I think permanently made it harder for him to 1. Some of this is one race at a time. The bigger story is that Kevin McCarthy recruited new people, this will be the most diverse house Republican party in history. The most women. The most veterans. The most minorities. And in fact, if we had kept our incumbents in both 94 when we won and in 2020 when Kevin picked up 16 seats, we didn’t lose a single incumbent. If that were the case now, we would be closer to 230. So, one of the things we have to do is go back and look at why did certain incumbents lose. Was it a bad campaign. What was happening there. What I’ve seen tonight, and Calista and I were with Kevin on election night. I had been campaigning him for three days, just getting a feel for what’s going on, we were all sort of in a stake of shock. We all thought as you pointed out, when you look at the generic ballot, when you look at the national vote pattern, when you look at Florida and New York for example, returning huge majorities, you had a sense it was going to be a great night. But it wasn’t. I got curious about this. Kevin is going to be somewhere between 218 and 224. There have been seven congresses since 1916 in which the majority 220 to 223, which including of course Pelosi’s last majority. So, Kevin won’t be faced with something unprecedented. Denny Hastert was at 221 in one election and 223 in another election. So, you can govern with a pretty narrow majority. It’s challenging. It’s exhausting, it’s tricky. But it can be done. I think the Republicans are going to be in charge and as you know, passing over that gavel from Pelosi to McCarthy is an enormous shift in the balance of power in Washington.

Yeah, I don’t know if that is true in the long run. In the end, the American people outweigh any kind of geographic line. We’re gaining with Latinos, we are gaining with Asian Americas we are beginning to gain with African Americans. Two more years of Biden, we’ll have a great 2024.