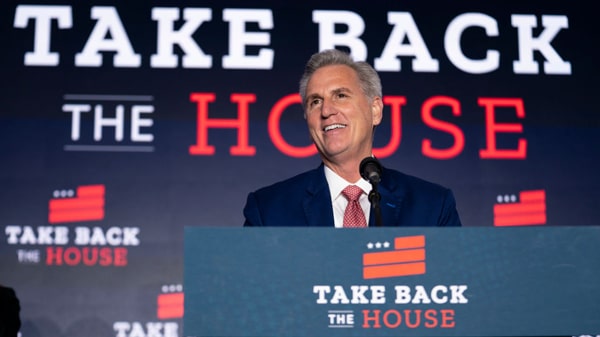 It is vital that Republicans offer a vision of a more successful, prosperous, safer, and freer America.

The new Republican majority in the U.S. House will face a major challenge dealing with the Democrat-run White House and U.S. Senate. So, it is vital that Republicans offer a vision of a more successful, prosperous, safer, and freer America.

The first goal is not to find a common ground with leftwing, radical Democrats who reject virtually all our values. They are already tuning their political machine to fight us in 2024.

The first goal is to give the American people a sense of hope – and a belief that things can be dramatically better. (The lack of a positive vision led to disappointing Republican Senate campaigns.)

The Commitment to America was a step in the right direction. While it was not driven home as vividly as it could have been, it did give House Republicans enough of a positive message. This helped them carry the popular vote by more than 3 million and gain seats, while most of the Senate Republicans floundered in negativity. (Herschel Walker’s campaign has been mostly positive, but his opponent has been deeply negative and vicious.)

The most powerful visionary statement Republicans could make right now is simple: It is time to balance the budget, stop inflation, and create jobs.

House Republicans can deliver this positive vision of a brighter American future, because even in a minority we helped President Ronald Reagan stop inflation and create jobs in 1981. When we became a majority in 1994 with the Contract with America, we went on to balance the budget for four years, pay down the federal debt, curb inflation, move millions from welfare to work, and create a strong economy. This all happened with the largest capital gains tax cut in history. A key part of our budget balancing and job creating program was a systematic reduction in the regulatory burden, which had crippled small business and weakened even the biggest businesses.

The spending, policy, and bureaucratic messes of the current government present enormous opportunities for Republicans to offer a series of bold, popular reforms – and much-needed alternatives to the failed Biden policies that are eroding the economy and weakening America.

Given our experiences with balancing the budget for four consecutive years (the only time in our lifetime) and paying down the federal debt (when I left the Speakership, the debt was scheduled to be paid off by 2009) there are some obvious key principles to follow.

First, reports indicate that at least $600 billion were stolen from various COVID-19 programs. Rooting out and stopping corruption would save a significant amount of money.

Second, restoring the principles of the 1996 Temporary Assistance for Needy Families Act would greatly reduce the cost of welfare, food stamps, and Medicaid. People would go to work. Children would be raised from poverty (the largest decline in childhood poverty came after the 1996 act). People would shift from drawing from public coffers to contributing to them as working taxpayers. Requiring work or study for any federal aid should be extended to everyone except the severely disabled. For most Americans, modern science and technology can turn disabilities into capabilities. Any unemployment compensation should be accompanied with an education requirement. There is no reason to give money to people to do nothing. This change would expand the work force and reduce dependency.

Third, re–establishing national energy independence would create jobs, generate tax revenue, reduce costs to consumers, and allow us to replace Russia as an energy supplier to Europe. It would lower the cost of energy (and the U.S. government is one of the largest purchasers of energy). This would be a win-win for the balanced budget.

Fourth, simply rejecting all the Biden promises to dictatorships around the world would save billions. The recent offer by the Biden administration to transfer billions in “climate reparations” would be a good example.

Further, aid to Ukraine should be monitored and analyzed. While we should help the Ukrainians bravely fighting for their freedom on the ground, Ukraine’s government has a past reputation for corruption. Remember that President Volodymyr Zelenskyy was elected to fight this corruption.

Fifth, every congressional committee should review the departments over which they have jurisdiction with a results–based rather than process–based model. We spend billions of dollars on programs which simply do not work. Much of the money we spend on education has failed to improve test scores. The typical Washington solution has been to spend more money on the same programs that are failing.

For example, NASA’s Space Launch System has had one successful launch – after a 20-year, $40 billion total investment. There are private companies which can operate much less expensively, but the NASA-industrial lobbyists complex wants to continue building this absurdly expensive, outdated system.

Similarly, the Department of Defense is filled with opportunities to reduce cost.

Every department should be asked to rank the importance of their programs, and Congress should review – eliminating the bottom third of their lists. Further, the Trump administration program of cutting two regulations for each new one created should be written into law and enforced.

Regulatory proposals such as the new Biden climate change regulations for government contractors (which the Washington Times reports could cost $604 billion the first year) are good targets for the principle of prioritizing job creation over regulation.

The time to start is now.