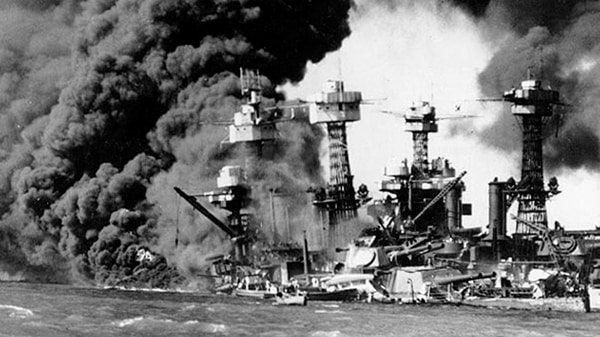 Now is a good time for Americans to think about the hard lessons of neglecting history and ignoring reality.

This week marked the 81st anniversary of the Japanese surprise attack on Pearl Harbor on Sunday, Dec. 7, 1941. Unfortunately, based on our current position in the world, we did not learn enough from it.

Now is a good time for Americans to think about the hard lessons of neglecting history and ignoring reality.

What President Franklin Delano Roosevelt called “a date which will live in infamy” was avoidable, and proper planning could have made dealing with the aftermath much easier.

The surprise itself was even avoidable if the U.S. Navy had been able to deal with change honestly. However, the bureaucracy favored battleships over aircraft carriers as decisive weapons. And, so, naval leaders ignored a surprise attack on a peacetime maneuver during a training exercise nine years earlier.

The exercise involved a Sunday morning surprise attack with 152 aircraft from the carriers Saratoga and Lexington. Their commander, Adm. Harry Yarnell, was one of the few high ranking naval officers in that period to have commanded an aircraft carrier. During the exercise, he left his battleships behind and attacked with air power. It was a shocking success. Then bureaucratic politics intervened.

“The umpires declared that Yarnell’s attack had been a complete success and declared him the winner. The Army and Navy brass, however, would have none of it. They complained that Yarnell had cheated. He had attacked at dawn on a Sunday morning, a time considered ‘inappropriate’ for an attack. His attack vector from the north-northeast had mimicked planes arriving from the mainland. Most importantly, the Navy argued, low level precision bombing of battleships at anchor was unrealistic since ‘everyone knew that Asians lacked sufficient hand-eye coordination to engage in that kind of precision bombing.’”

Acknowledging tragic cost of the blatant racism of the time, we should not kid ourselves today. We are as capable of blinding ourselves to dangers and hiding from reality as the generation that stumbled into the shocking surprise at Pearl Harbor.

In a remarkable column, Bret Stephens of the New York Times wrote, “Are we Sleepwalking through a “decisive decade?”

Stephens asserted, “The United States, President Biden says, has entered a ‘decisive decade’ when it comes to geopolitics. He’s right. But even amid the war in Ukraine and China’s growing belligerence toward Taiwan, we mostly seem to be sleepwalking into it. The administration trumpets its promises to defend the free world. But it isn’t yet willing to provide sufficient means — a dangerous mismatch in an era of authoritarian adventurism.”

You should read the entire column by Stephens but here are some of his key points:

The U.S. Army and U.S. Air Force are facing massive personnel shortages (1,650 pilots and 30,000 Army recruits), and many of our hard warfighting assets are decades old.

As Stephens said, “We are now in a new era of great-power competition in which our traditional military advantages can’t be taken for granted. Now is the time for real public debate about what we mean to do about it.”

Speaker-designate Kevin McCarthy’s announcement of a new Select Committee on Communist China is a good first step toward creating the kind of fact-based national debate we need about the challenges to our survival.

Chairman Mike Gallagher will lead an aggressive inquiry to understand what the Chinese Communists are doing – and what we will need to do to defend freedom for America and our allies.

However, we are going to need a lot of bold thinking – and a serious national debate that involves all Americans and transcends partisan bickering if we are survive in an increasingly dangerous world.

Here are two simple starter examples of how big the changes need to be for America to survive as a free nation.

First, our education system is so broken it must be thoroughly overhauled. Graduating students who can’t read, write, or do basic math is a road to disaster – for them and the country. In the age of artificial intelligence, drones, and space-based activities, how can a nation that has millions of illiterate or marginally literate citizens expect to compete. Education reforms are a national security issue.

Second, the Pentagon is much more broken than anyone wants to admit. It opened in 1943 (the year I was born) and was designed to hold 26,000 people using manual typewriters, carbon paper, and filing cabinets to manage a global war. I don’t know what the information improvement is between smartphones, tablets, and laptops over manual typewriters, but it must be at least 1,000:1. Why do we need 26,000 administrators in the Pentagon? We might be better off turning it into a triangle and using the obsolete two-thirds as a museum of national security.

This is the scale of debate we need if we are truly to learn and implement the lessons of the Sunday morning disaster at Pearl Harbor.