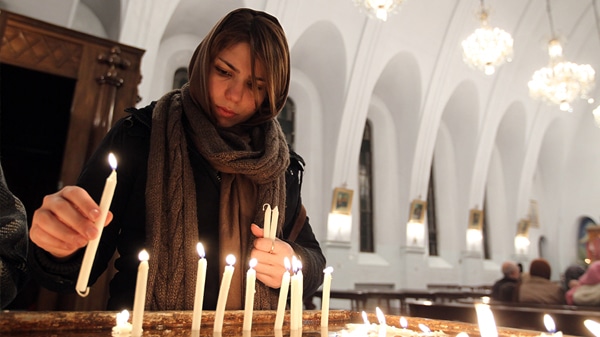 This year, an estimated 112.7 million people will travel to be with their families and loved ones to celebrate this special time of year. Many will attend Mass or church service to commemorate the birth of Jesus Christ on Christmas Eve and Christmas Day.

As Americans, we are fortunate to have the freedom to openly celebrate the birth of Jesus Christ. Sadly, many around the world are denied this fundamental human right.

Today, more than 80 percent of the world’s population lives in countries where religious freedom is highly or severely restricted. For millions of people – repression, violence, and discrimination are a part of daily life.

For instance, in North Korea, Kim Jong-Un continues to strip the Korean people of their fundamental right to worship freely. Some organizations estimate that 50,000 to 70,000 Christians are in prison for exercising their religious beliefs in North Korea. Through fear, intimidation, and retribution, the Kim regime has repressed freedom of thought, conscience, and religion.

In China, the Chinese Communist Party targets Christians, who make up the country’s largest religious minority. Thousands of Christian churches in China have been shuttered, worshipers have been arrested, and images of religious figures have been replaced with pictures of General Secretary Xi Jinping. Through its “sinicization of religion,”  the Chinese Communist Party attempts to control faith by demanding that all religious groups and worshippers support the Party and its ideology.

In the Middle East, Iran continues to persecute religious minorities, including Christians – especially those who convert from Islam. Women who refuse to comply with the government’s restrictive Islamic dress code are subject to arrest, beatings, and other punishments.

After Mahsa Amini was arrested by Iran’s morality police for wearing a hijab incorrectly, which led to her sudden death in custody, protests erupted across the country in one of the most significant shows of opposition to the Iranian regime since the 1979 Revolution. According to the Human Rights Activists’ News Agency, so far, at least 490 protestors, including 68 children, have been killed during the demonstrations. The group also reported that more than 18,200 people have been arrested in connection with the protests.

Additionally, for Nicaragua’s President Daniel Ortega and his wife, Vice President Rosario Murillo, religious freedom poses a significant threat to their grip on power. Nicaragua’s Catholics, which make up more than 50 percent of the country’s population, have been a strong force of resistance and, as a result, have been targeted for voicing their opposition to the authoritarian Ortega-Murillo regime.

As of July 20, the U.S. Department of State reported that, in 2022, the legal statuses of more than 800 nongovernmental organizations (NGOs) have been canceled by the Ortega-Murillo regime.  The Missionaries of Charity, a religious order established by Saint Teresa of Calcutta, was among the hundreds of charitable organizations forcibly closed by the regime, and the sisters were expelled from the country.

The residence of prominent regime critic Bishop Rolando Álvarez was raided in August, and the bishop, along with priests, seminarians, and a cameraman, were arrested. On December 13, the Bishop was ordered to remain under house arrest and was charged with crimes of conspiracy.  He is currently awaiting a hearing in January.

Whether in North Korea, China, Iran, or Nicaragua, dictators and oppressive regimes around the world have at least one thing in common; they fear faith and freedom, because faith and freedom threaten their authority and control.

Tragically, this is just a fraction of the attacks against religious freedom faced by people of faith every day. As Bishop Alvarez correctly stated, “We have to respond to hate with love, despair with hope, and fear with the strength and courage given to us by the glorious and resurrected Christ.”

As we gather with loved ones this Christmas, let us gives thanks for the blessings of freedom and be reminded of our responsibility – not only as Americans, but as people of faith – to cherish and defend religious freedom around the world.