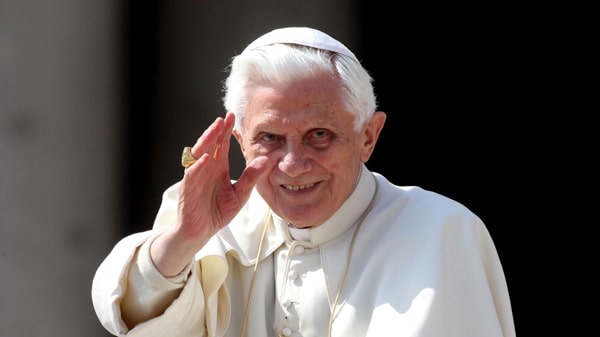 On Thursday, January 5, Pope Emeritus Benedict XVI was lifted in prayer by tens of thousands of the faithful in Saint Peter’s Square and millions around the world as he was laid to rest at Saint Peter’s Basilica.

Pope Francis presided over the simple and solemn Requiem Mass, which was concelebrated by 125 cardinals and more than 3,700 priests.

In his homily, the Holy Father said that we “commend our brother (Benedict) into the hands of the Father,” and prayed, “May those merciful hands find his lamp alight with the oil of the Gospel that he spread and testified to for his entire life.”

Pope Benedict, born Joseph Ratzinger in 1927 in Marktl, Germany, was ordained a priest, along with his brother Georg, on June 29, 1951. After obtaining a doctorate in theology, Father Ratzinger became a university professor and taught theology and dogma.

He played a critical role in Vatican II from 1962 to 1965 and served as a chief theological advisor to the Archbishop of Cologne, Cardinal Josef Frings.

In 1981, Pope John Paul II appointed him Prefect of the Congregation for the Doctrine of the Faith. Additionally, Cardinal Ratzinger became President of the Biblical Commission and of the Pontifical International Theological Commission.

After the death of Saint John Paul II, Cardinal Ratzinger was elected the 265th Pontiff of the Roman Catholic Church on April 19, 2005, choosing the name Benedict XVI.

An accomplished academic, Pope Benedict saw his vocation as “theological” and thus shared his knowledge with others through writings, books, and homilies.

In a recent interview, former EWTN Rome Bureau Chief Joan Lewis recalled that Pope Benedict, whom she met 30 years ago when he was still Cardinal Ratzinger, “Always tried to explain things to people. Even if they were on the other side of an argument, of a topic, he just knew there had to be a way to make them see the truth.”

Pope Benedict dedicated much of his life to the defense of truth, rationality, and reason. He was steadfast in his belief that faith and reason must work together in concert. As the pontiff explained, a rupture between faith and reason offers the world an insufficient choice between unreasonable faith or soulless reason.

Instead, Pope Benedict saw the important interplay of faith and reason similarly to his predecessor, Saint Pope John Paul II, who wrote in Fides et Ratio, “Faith and reason are like two wings on which the human spirit rises to the contemplation of truth.”

Throughout his pontificate, Benedict strongly opposed what he called “the dictatorship of relativism.” He boldly asserted that there are certain moral, intellectual, and aesthetic truths that are enduring and known.

He first proclaimed this in a homily while celebrating Mass in 2005, just before the conclave that elected him to the papacy.

“How many winds of doctrine have we known in recent decades, how many ideological currents, how many ways of thinking?” Ratzinger said. “The small boat of the thought of many Christians has often been tossed about by these waves – flung from one extreme to another… We are building a dictatorship of relativism that does not recognize anything as definitive and whose ultimate goal consists solely of one’s own ego and desires.”

It may have been unintentional, but his remarks served as a preview of Benedict’s pontificate.  As the late pontiff’s private secretary, Archbishop Georg Gänswein, said, the Holy Father’s strongest message was “that truth is not something that has been thought, but is a Person: it is the Son of God. God became incarnate in Jesus Christ… and this is his message: to follow not a theory of truth, but to follow the Lord.”

One’s relationship with Jesus Christ is at the heart of what it means to be a Christian. As Bishop Robert Barron wrote, “Pope Benedict said that Christianity is not an ideology or a philosophy, but rather a relationship to a person, to the living Jesus Christ.”

Though Pope Benedict had “the intelligence of 12 professors,” as the late Cardinal Joachim Meisner said, he was “as pious as a child on the day of his First Communion.”

Uttered in the early morning hours of December 31, Pope Benedict’s last words stand as a testament to his entire life: “Lord, I love you.”

Let us thank God for the life of Pope Emeritus Benedict XVI.