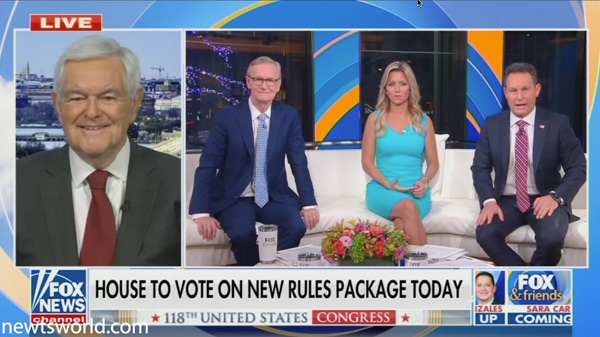 Look, Hakeem has a huge problem. He has to go from a dictatorship where he was one of the dictators to just being a member. All of a sudden the house is going to be open. They’re going to have open rules. The rules committee is going to allow amendments. Bills are going to come through committees, not through Nancy Pelosi’s office. Now, Akim must be in shock like being in the soviet union or Cuba and suddenly being told you actually to be a free society. The Democrats are finding all of this very confusing, it’s going to be mess it’s going to be complicated. It’s going to take speaker McCarthy paying attention seven days a week. But it’s called freedom and I think they are going to be very successful. They are going to, I think, move today to repeal the 87,000 additional IRS agents. Let’s see where the Democrats are. I’ll bet all of them vote for bigger government. More bureaucracy and more audits of your tax account. While all being pious. I think this is a very exciting time and I think frankly this is a very healthy process and the house is going to be much more wide open, and I thought the new whip, Tom Emmer was very good a few minutes ago in pointing out, they are opening up the house for the American people for the first time since COVID hit.

Sure. I don’t think it will be 15 vote every time. But I think you’re going to have a constant challenge in the Republican conference between moderates who feel that too much was given to the hard right, people on the hard right who want even more, or they want it sooner or whatever. So, this will be a balancing act but, remember, Pelosi ran the house with exactly the same margin that McCarthy has. Denny Hastert had a 5 vote margin at one point one more than speaker McCarthy has. So, it can be done. It’s going to be challenging. But I also think Republicans have to shift for the news media expectations. I will give you one example. My view of — if I were there, my view would be the Republicans owe the debt ceiling four votes. That’s the number — if Hakeem delivers every single Democrat and they are the people that voted for all the spending they only need four votes. That’s a totally different model of negotiating than people who want to put the burden on the Republican party.