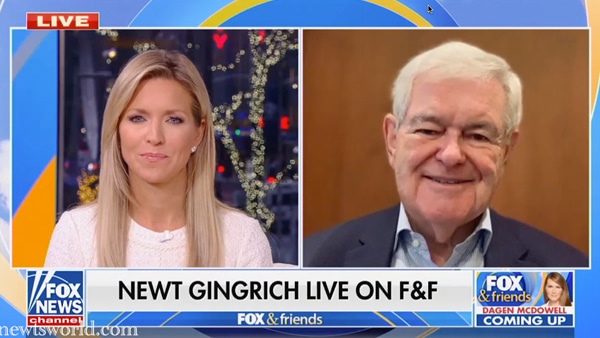 Look, I think what is happening is the documents at the beginning of the unraveling of the entire Biden basically criminal family operation, first of all the documents are going to lead you to the University of Pennsylvania where the Chinese communist gave millions, millions of dollars they refuse to open their books. The president of the university of Pennsylvania got to be the ambassador to Germany. People like the secretary of state, the current president, Biden got a million dollars for nine appearances we have no idea where the money went, we have no idea what the influence was. It is ironic that so many of these documents were found at a University Pennsylvania office. Second, this leads you right back to Hunter Biden is the bagman. Because the first wave of documents included documents about Ukraine at about the time Hunter Biden was getting hired by Barisma the Ukraine energy company, largely because he was the son of the vice president. So that’s all going to be wrapped up together, and then finally this is going to make this an absurdity of the attack on Donald Trump. The fact is Biden can’t tell you, they said this openly, he has no idea who had the documents, he has no idea what documents we were talked about, now imagine we are talking about very secret documents which the current president of United States openly says somehow somebody somewhere got them and they took them away and he has no clue. Which also says to me, if the FBI were serious they would be looking at all of Joe Biden’s multiple homes. They would be looking at all of his offices for last ten years. Just to figure out what else is out there? This is not going to go away. This could get bigger.

First of all, it raises the question because it gets right back to the University Pennsylvania we know the secretary of state is being paid by the university Pennsylvania, we know that the vice president is being paid, how many people in the current Joe Biden administration and the current white house staff were getting money out of the university Pennsylvania and why won’t the university release the finances? They claim that the millions, and millions of dollars that the Chinese had given the university didn’t go to Biden. Then fine, where did the money come from? Was the deal? And the fact is I was working on this  in the Donald Trump administration we cannot get them to tell us the truth. They are totally hiding all this information I suspected a new Republican house is going to subpoena all the documents from the university Pennsylvania and insist they share with us, I think this is way beyond Joe Biden. I think there’s huge chunks the administration but is the habit, Sandy Berger the national security of Bill Clinton and getting ultimately going to jail because he had gone to national archive in the literally snuck documents that are secret in his socks, and in his underwear and got caught. Hillary Clinton erased 32,000 emails and broke a hard drive with a hammer be very curious of John Kerry has had. Interestingly documents are initially discovered are documents that do relate to Ukraine into Iran and related to Ukraine at a time when Hunter Biden was the bagman for was basically a criminal family. I mean the Biden’s as an operation it made perfect sense if you ever saw “The sopranos” you understand exactly what’s going on.