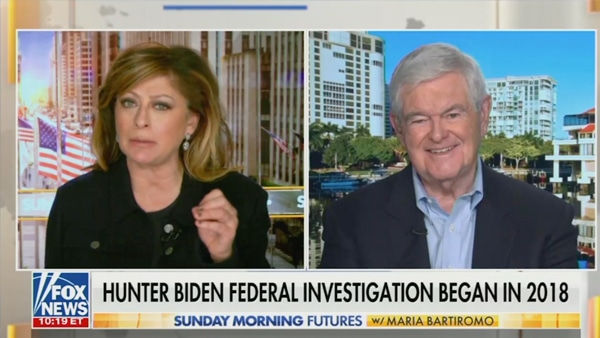 Well, the University of Delaware has kept everything totally secret, they even had a state judge condemn them for their secrecy. We have no idea where the money comes from. And, by the way, in terms of looking for documents, there are 1,850 boxes and several hundred electronic documents that Biden transferred to the University of Delaware. I don’t know that anybody has begun to look through those to boxes which were theoretically sealed. But you need to look at them to find out are there any classified documents in that 1,850 boxes plus several hundred electronic documents that were transferred there. No one knows who’s given money to the University of Delaware, how much money they’ve given. They have a Biden center just like the University of Pennsylvania. As you point out, we know that the Chinese communists are in for well over $50 million at the University of Pennsylvania, and that produced, of course, the ambassador to Germany and ambassador to Canada out of the senior leadership of the University of Pennsylvania. So, I really do believe these are the Sopranos. I think part of the reason that congressman, chairman Comer is going to have a really hard time is they have no interest in cooperating. Everything they reveal is going to make them weaker and going to make hem guiltier. Actually, you may know in this, where is the diamond? I mean, if there’s a diamond that big hanging around, who has it? Was it reported as government property? Was it reported on taxes? That’s a pretty good gift.

Well, it’s exactly like the Hillary Clinton eliminating 31,000 e-mails and literally physically breaking up a hard drive with a hammer. You know, you would have thought that those are probably criminal behaviors. But not for Hillary. People underestimate, and let me just say this as a fact, we have in the justice department and the FBI a level of corruption unprecedented in American history at the most senior levels. Not the average, everyday worker, but at the senior levels the corruption’s there. It’s been there at least since the middle of the George W. Bush administration. It has gotten sicker and sicker. They have total contempt for the rule of law, they have total contempt for the news media. And you see this right now in the difference between mar-a-lago and Joe Biden. You see it with Hunter. You know, the fact is hunter Biden was a drug addict doing business with Russia and China while advising his father on where to send secret documents. Ask yourself, could it get weirder than that?

Well, he’s done very well the first two weeks. I think the fact that Joe Manchin has come out and said publicly today he wants to meet with McCarthy tells you that McCarthy’s reach is going to be beyond the house. I think he’s actually stronger for having survived 15 votes and gotten to be speaker, and I think he’s had a great opening two weeks.