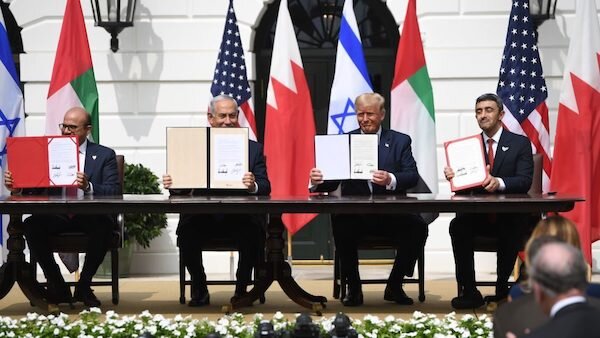 The experts told us the Middle East would explode in December 2017, after President Donald Trump recognized Jerusalem as the capital of Israel.

And yet, each time life continued in the region as it had before. There were some protests and a few isolated instances of violence, but that’s it. Journalists, commentators, the diplomatic establishment — they were all wrong. So too was the prevailing conventional wisdom, which had dictated Washington groupthink for decades.

In fact, rather than spur chaos, the Trump administration’s staunch support for Israel, tough posture toward the Palestinians, and campaign of maximum pressure against Iran actually yielded Arab-Israeli peace in the form of the Abraham Accords.

But with President Joe Biden in the White House distancing from Israel and engaging the Palestinians and the murderous regime in Iran, we’re witnessing massive violence in the Middle East. Palestinians are rioting in East Jerusalem, chanting “bomb Tel Aviv,” while Hamas fires rockets from Gaza into Israel, targeting civilians.

On this week’s episode of my podcast, “Newt’s World” I speak with one of the people most responsible for the Abraham Accords: Mike Pompeo.

As secretary of state under President Trump, Pompeo led America’s diplomatic push in the Middle East. In our conversation, he recounts the thinking behind the administration’s approach to the Middle East — valuable insights for today, as America pursues the exact opposite policies, and the region experiences a new round of violence.

Of course, Pompeo had remarkable success as our country’s top diplomat beyond the Middle East. He helped moved the global consensus to recognize that the Chinese Communist Party poses the greatest threat to the West. He also prioritized religious freedom and went to extraordinary lengths to fight for people to worship God on their own terms, not as dictated by the government.

Moreover, Pompeo had astonishing success in securing the release of dozens of American hostages across the world, including from Iran, Turkey, and North Korea. It was especially striking to hear him detail the emotional experience of bringing home the last three Americans being held in North Korea.

Of course, Pompeo didn’t just serve as secretary of state. He also served as director of the CIA and, before then, as a member of Congress from Kansas. With such credentials, Pompeo is able to speak on a wide array of issues, including the CIA’s troubling push to become more woke and the Democrats’ bid to federalize national elections and entrench themselves in power permanently through HR 1.

He, like most Americans, recognizes the dangers of big government and the creeping authoritarianism we’ve seen domestically. The Trump administration recognized the same thing.

But the Biden administration believes the exact opposite: that we need more government control at home and less American leadership abroad. This is a disastrous formula that, if it continues, will damage America — and our allies — for years to come.