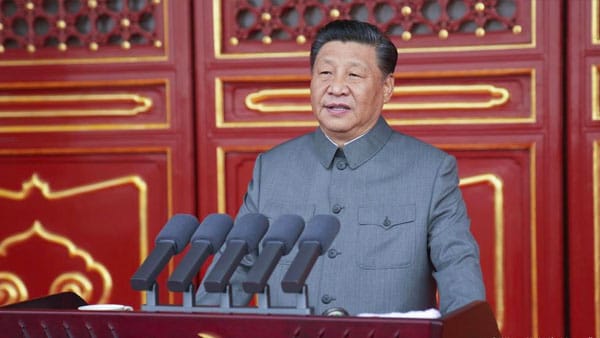 The ruling Chinese Communist Party just turned 100. To mark the anniversary, the party’s militant leader, Xi Jinping, delivered a fiery, defiant, and dishonest speech in Beijing. The key takeaway: China’s only getting more aggressive from here.

In the speech, Xi boasted of “the great rejuvenation of the Chinese nation,” declaring China will become a “great modern socialist country” by 2049. He also ensured the Chinese military will reach “world-class standards.”

Xi even said China had “created a new model for human advancement” and would spread it worldwide to build a “human community with a shared future” — a Communist Party euphemism for a Chinese-led global order.

This is hardly the first time Xi has used such rhetoric.

In 2017, he told the 19th National Congress of the Communist Party that China is “blazing a new trail for other developing countries,” offering “Chinese wisdom and a Chinese approach to solving the problems facing mankind.” He added that, by 2049, China would “become a global leader in terms of composite national strength and international influence” and build a “stable international order” in which it will achieve “national rejuvenation.”

In another speech delivered to the Communist Party’s Central Committee in 2013, Xi explained that Chinese leaders must prioritize “building a socialism that is superior to capitalism and laying the foundation for a future where we will win the initiative and have the dominant position.”

Simply put, China intends to displace America as the world’s most powerful country. Indeed, the Chinese government seeks global supremacy, to upend the American-led international order and replace it with an imperial system in which everyone obeys Beijing.

The US has an obligation to stop China if it wishes to remain safe, prosperous, and free.

To those who oppose China’s ambitions, however, Xi had a clear message last week: “We will never allow any foreign force to bully, oppress, or subjugate us. Anyone who would attempt to do so will find themselves on a collision course with a great wall of steel.”

According to some translations, Xi said those who oppose Beijing would “crack their heads” or “have their heads bashed bloody” against the wall of steel. Either way, the point remains the same: Don’t get in our way, or else.

Of course, no one is trying to bully or subjugate China, which over the past half-century has transformed from a backward agrarian society to the world’s second richest and most powerful country. That doesn’t happen while being oppressed.

The one doing the actual bullying and oppressing is the Chinese government, which is committing genocide against the Uyghurs while subjugating the people of Tibet and Hong Kong.

China is also encroaching on India; taking control of ports around the world; stealing intellectual property; trying to control international organizations; pursuing the Belt and Road Initiative across Eurasia; weakening democratic institutions in the developing world; seeking to dominate the fields of high technology and manufacturing; and projecting military power in the Arctic, South China Sea, and Indian Ocean.

And then there’s democratic, independent Taiwan, the seizure of which Xi declared “a historic mission and an unshakable commitment.”

That echoes Xi’s remarks in January 2019, when he said, “China must be, and will be, reunified,” adding, “We do not forsake the use of force.”

Yet Xi had the audacity to claim last week that China has “never bullied, oppressed, or subjugated the people of any other country, and we never will.” He also had the audacity to warn those who oppose his agenda that they’ll suffer the consequences. Because being strong and successful isn’t enough; the Chinese Communist Party wants the world, and anything less won’t cut it.

In short, as China rises, so too does its belligerence. The Communist Party may be 100, but to quote Xi, it’s still “in its prime” — committed as ever to realizing its global vision.

Countering the Chinese threat is the great contest of the 21st century, the gravest risk to American security and democratic governance since the Soviet Union. Whether America succeeds will determine whether we and future generations inhabit a world of freedom and opportunity or darkness and oppression.