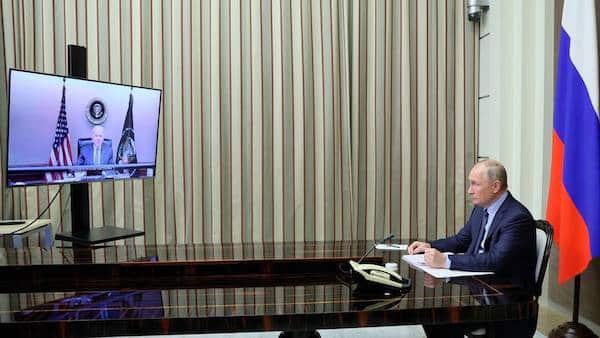 President Joe Biden’s talk with Russian President Vladimir Putin seems to have had no impact on Putin’s plans to threaten – and likely invade Ukraine.
A day after Biden threatened economic sanctions and military supplies for Ukraine and nearby NATO allies, tens of thousands of Russian soldiers, tanks, and artillery remain at Ukraine’s border.
As one Kremlin foreign policy advisor told reporters after the call, “Sanctions aren’t something new. They have been in place for a long time and will not have any effect.” It seems clear that Russia is not threatened by Biden and doesn’t believe he has the will to do anything serious if (read when) Ukraine is invaded.
Indeed, Russia is set to send more than 175,000 troops to the Ukrainian border come next year. Putin, as well as pro-Kremlin media outlets, say that the increased military presence is the fault of Ukraine and NATO. Prior to their meeting, Putin was demanding that the United States guarantee that Ukraine will not become a member of NATO or be occupied by the militaries of any NATO members.
With the world watching, Russia is flexing its muscles. Many are becoming increasingly aware of the threat that Russia poses – and the apparent ineffectiveness of the Biden White House. The Biden administration has said an invasion will come at a cost to Russia. However, the only concrete thing to come out of Tuesday’s call was that envoys will be named to keep the conversation going. Putin doesn’t seem to be worried.
On a recent episode of my podcast, Newt’s World, I was able to sit down with Rebekah Koffler to discuss the threat Russia poses to Ukraine and the United States. As someone who was born in Russia and spent years working with the Defense Intelligence Agency and the Central Intelligence Agency, Rebekah is uniquely qualified to investigate this issue. In her new book, Putin’s Playbook: Russia’s Secret Plan to Defeat America, Koffler outlines how the former KGB officer thinks and how Russia can gradually bring an end to America through psychological warfare, military prowess, and cyber warfare.
On my podcast, Koffler explained Russian strategy is centered around three ideas: building its military, keeping opponents guessing, and destabilizing adversaries psychologically. This is Putin’s plan – a plan that he was executing even as he and President Biden spoke.
While Koffler does not believe Russia will attempt to invade the entire country of Ukraine, she does believe that Ukraine is the “real game.” The Russians – and Putin in particular – want to reestablish the Soviet Union.
The only question remaining is: How tough is Biden willing to be?
Click Here to Listen to More Episodes of Newt’s World