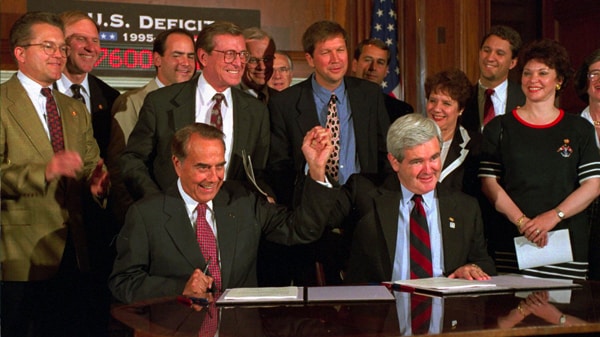 With our debt exceeding $30 trillion, our polling shows the American people are rapidly shifting toward a belief that we need a balanced budget.

The national debt has passed $30 trillion. It is clearly time to start talking about balancing the federal budget.

The explosion of federal debt has been astonishing. In 1980, the national debt was $908 billion. Today, it is more than $30 trillion and growing. That is a more than 3,204 percent increase in 42 years.

Federal debt has grown much faster than the economy. While the debt has risen more than 3,204 percent, the gross domestic product (GDP) has only risen from $2.86 trillion to $20.94 trillion –

In 1980, the economy was three times bigger than the national debt. Today, the debt is 50 percent bigger than the entire economy. This gap is growing each year as government borrows more than the economy grows. A serious recession would rapidly make the debt-to-economy ratio even worse.

The debt has seemed relatively benign because interest rates have been low. However, as the Federal Reserve starts to grapple with the threat of inflation, interest rates will rise. As the largest debtor in the world, the federal government will be hit hard by the rising interest rates. In fact, if interest rates start rising, the federal budget will be severely hit by the growing share that will go just to pay interest on the debt.

Even though no major politician has made balancing the budget a key issue, the American people are rapidly shifting toward a belief that the budget should be balanced. A recent poll we sponsored at The American Majority Project, conducted by Mclaughlin & Associates, reported that 70 percent of Americans favor a constitutional amendment to balance the budget. Only 13 percent oppose it. We also found that based on input received in focus groups, “Support for balancing the budget is driven by a belief that it will force Congress to set priorities, solve the root causes of problems, and that it is something that every family and business must do, therefore Congress should do so as well.”

The poll also asked, “If the government actually cut out wasteful spending and corruption, do you think that would be enough to balance the federal budget?” An amazing 58 percent said “yes” and only 26 percent said “no.”

As the Speaker of the House who launched the only four years of balanced budgets in our lifetime, I was keenly interested in the answers to two other questions on our American Majority Project poll.

The poll asked, “If you knew Congress had balanced the budget for four straight years in the 1990s, would that make you more likely or less likely to think getting a balanced budget is possible?” Fifty-six percent said it made them more likely to believe the budget could be balanced. However, 31 percent said it did not, and several people pointed out how much things had changed since the 1990s.

More encouraging was the response when people were informed that, “The successful formula in the 1990s was to control government spending, cut regulations, reform welfare so people had incentives to work, and cut taxes in order to increase economic growth and increase revenues as the economy got bigger.” The poll then asked, “Would you approve or disapprove of congress using the same economic policies now?”

By 73 percent to 14 percent, the American people approve of the high-growth, deep reform, spending control with some specific increases model. Our approach in the 1990s was not simple stinginess. You must have a smart approach to balancing the budget – not a penny-pinching approach. For example, we set out to double the National Institutes of Health budget – because it would save lives, money, and maintain American leadership around the world in a high salaried industry. We reformed welfare – we did not just make it cheaper. We reformed the telecommunications laws leading to an explosion of growth in jobs and declining costs to consumers.

Equally encouraging was the bipartisan nature of support for our approach to a balanced budget through economic growth and reform. While 83 percent of Republicans supported it, so did 71 percent of independents and 65 percent of Democrats.

With an open, participatory dialogue, it would be possible to build a huge national majority in favor of balancing the budget. This should be a major policy goal for both parties – and the debate should begin this year in the 2022 election campaigns.