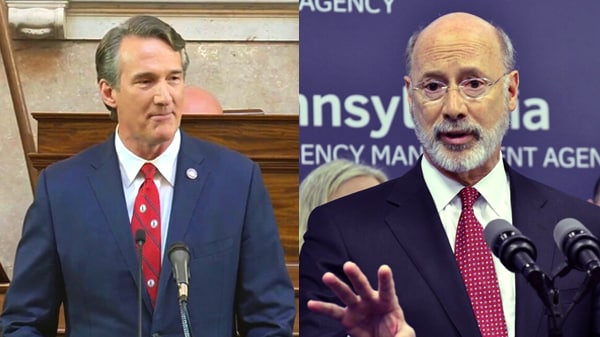 Pennsylvania Gov. Tom Wolf and Virginia Gov. Glenn Youngkin are moving their states in opposite directions.

Pennsylvania Gov. Tom Wolf and Virginia Gov. Glenn Youngkin are moving their states in opposite directions.

Gov. Youngkin is focused on lowering the cost of living and improving Virginia’s appeal as a place to do business. Boeing’s recent announcement that it is moving from Illinois to Virginia is an example of his efforts. Youngkin’s aggressive pro-jobs push led CNBC to call Virginia the No. 1 state in the country for business.

As Youngkin said when announcing Boeing was coming to Virginia, “From day one, our goal has been to make Virginia the best place to live, work, and raise a family.” Youngkin appears to be meeting this goal.

By contrast, Gov. Wolf has been making Pennsylvania more expensive to live in and less attractive to businesses seeking to invest and create jobs.

Wolf’s most recent attack on the Pennsylvania standard of living was an executive order to have the state join the Regional Greenhouse Gas Initiative (RGGI). This Big Government Socialist left-wing regulatory regime is designed to reduce greenhouse gases – no matter what it costs the average citizen in higher prices and fewer jobs.

The RGGI is a coalition of northeastern states that have joined in an economic suicide pact to make their economies less competitive, less desirable for job creation, and a lot more expensive for the people who still live there. New York alone has lost more than 1 million residents in the last decade as they move to lower cost, job-friendly states.

This is the kind of anti-citizen, anti-consumer, anti-jobs psychology which is driving people out of the Northeast and toward Florida, Texas, Tennessee, and other less expensive and more practical states.

The cost of Gov. Wolf’s anti-fossil fuel initiative will be particularly expensive in Pennsylvania, which is the home of the Marcellus Shale (an enormous source for natural gas that has an estimated 400-year supply). In fact, Pennsylvania is the third largest producer of power in America. So, Gov. Wolf’s executive order directly attacks one of his own state’s greatest assets.

The Democrat nominee for governor, current State Atty. Gen. Josh Shapiro, has been wavering on the executive order. His office approved the Wolf executive order but explained that it was only a technical approval of the language’s legality – not a policy agreement. (What a tremendous show of political courage.)

Shapiro is going to have a real dilemma. The more that average Pennsylvanians hear about the cost-increasing and job-killing nature of Wolf’s executive order, the more they are going to oppose it. However, the left wing of the Democrat Party is deeply committed to regulating greenhouse gas – no matter the cost in jobs and prices.

Mastriano will clearly have an easier time following the Youngkin example toward lower costs and more jobs.