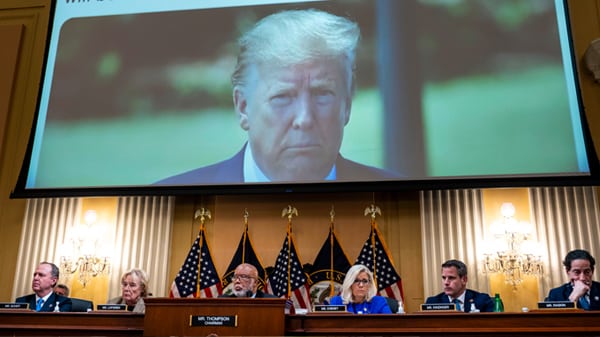 The Jan. 6 Committee propaganda primetime show had nothing in common with legitimate congressional hearings. Instead, it was a show trial worthy of Joseph Stalin.

I served 20 years in the House – 16 in the minority and four as Speaker of the House.

Before I was elected, I watched the Watergate hearings about President Richard Nixon.

As Speaker, I authorized the investigation and trial of President Bill Clinton.

What I saw last night was a show trial worthy of Joseph Stalin. As leader of the U.S.S.R., Stalin would try people in public (with the verdict predetermined). All testimony would be distorted to provide the conviction. As his secret police chief, Lavrentiy Beria, once said, “show me the man and I will show you the crime.”

Last night’s Stalinist show trial proved that the Nancy Pelosi Democrats and their Republican co-conspirators have completely lost touch with the American people.

There is a sense of fairness and due process which is central to American freedom and independence. The Jan. 6 Committee has violated every aspect of due process, presumption of innocence, and impartial search for truth.

The contempt Democrats (and the two turncoat Republicans) have for the American people is astonishing.

They think we are too dumb to know they can edit video and distort testimony.

They think we are too lazy to check primary sources which reveal their deliberate distortions.

They cynically believe no one will ask obvious questions that involve Speaker Pelosi’s failure to protect the Capitol, even when she was warned days in advance that people would be gathering on the Mall.

They do not realize that no rational person thinks “reality TV” is real. They wanted to propagandize us, and Americans are amazingly resistant to being manipulated by such a “made for television” approach.

Bringing in a television producer, former President of ABC News James Goldston, to produce the Jan. 6 hearings and develop a script to be read from teleprompters sent the clear signal that the entire exercise was baloney.

The ultimate arrogance and fanaticism may have been Rep. Liz Cheney’s comment that “Tonight, I say this to my Republican colleagues who are defending the indefensible: There will come a day when Donald Trump is gone, but your dishonor will remain.”

After taking 35 minutes and 55 seconds to deliver her fantasy version of history, Cheney then had the temerity to suggest that she had the moral authority to condemn the overwhelming majority of Republicans who simply disagree with her. It is hard to find a better example of the viciousness with which the Left views Republicans. It also helps explain Pelosi’s refusal to take threats to the lives of conservative Supreme Court Justices seriously.

It turns out, Hillary Clinton isn’t the only one who thinks we are deplorable.

Despite all this, the staged propaganda effort destroyed its own case.

Cheney admitted that there had been intelligence reports warning of violent groups potentially attacking the Capitol days before Jan. 6. If that is true, how could Donald Trump’s speech on Jan. 6 have been the cause of the riot?

In her own words:

“The attack on our Capitol was not a spontaneous riot. Intelligence available before Jan. 6 identified plans to ‘invade’ the Capitol, ‘occupy’ the Capitol, and take other steps to halt Congress’ count of Electoral Votes that day. In our hearings to come, we will identify elements of those plans, and we will show specifically how a group of Proud Boys led a mob into the Capitol building on Jan. 6.”

Documentary producer Nick Quested – who was one of only two witnesses – testified that he and the Proud Boys actually went up toward the Capitol before the Trump speech. Furthermore, they stopped for lunch and got tacos. How could their move to the Capitol be the fault of Trump’s speech if they did it before he spoke?

Finally, Officer Caroline Edwards was a compelling witness. She had clearly been courageous and found herself in a terrible and frightening position. However, the Stalinist show trial refused to ask why there were not more security forces who could have saved her from the experience.

The fact is: Speaker Pelosi blocked the forces that could have protected the Capitol. Those additional forces could have made the entire riot impossible.

According to Just the News, days ahead of the Electoral Vote count, the Department of Defense, the National Guard, and other agencies approached Congressional authorities about sending “thousands” of national guard members to control the expected mob. All requests were denied.

Stalin would have been proud of last night’s propaganda effort.

The House Democrats and the turncoat former Republicans should be ashamed of themselves.

They have debased the House, undermined the Constitutional protections that guard Americans against their government’s power, and further increased public contempt for Washington politicians.