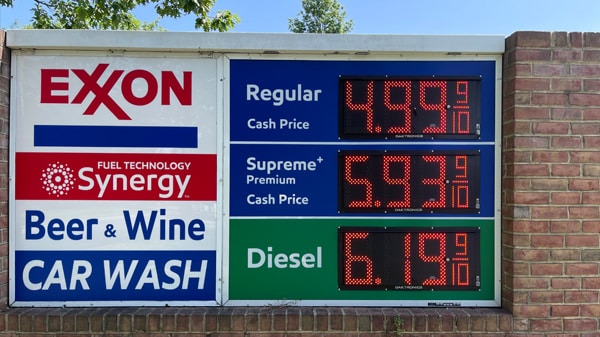 The prices you are paying at the pump are a function of Big Government Socialism’s hopelessly wrong ideological and theological rejection of reality – and preference for fantasies that simply do not work in the real world.

When Callista came home recently in a state of shock after spending $104.50 to fill up her car with gasoline, I thought it might be time to talk facts and sense about the current disaster in energy policies.

The Left insists on making the same mistakes over and over again.

President Jimmy Carter followed Big Government Socialist policies in the late 1970s and created a deeply painful explosion of inflation. He also oversaw a shortage of oil and gas caused in large part by the Iranian Revolution of Ruhollah Khomeini. The Left’s already dominant green ideology – what Theodore White in 1972 called a theology – made it impossible for the Carter administration to pursue the scale of domestic oil and gas production which would have brought down prices.

By 1979, the rise in gasoline prices and the theologians of the Left led to an anti-car, anti-traditional energy regulatory regime. One indication of how strange things had become was the 1981 dystopian movie “The Last Chase,” in which the filmmaker imagined a world in which fossil fuel had run out, democracy had collapsed, and a new authoritarian regime had stepped in to mandate public transportation and outlaw personal vehicles. Naturally, the surveillance necessary to enforce the mandates created a totalitarian dystopian society (except, ironically, in “Free California”).

However, the anti-energy bureaucracy in Washington continued to work to restrict the oil and gas industry, and when the Big Government Socialists won control of Congress in the 2006 election, they promptly moved to create an anti-energy strategy that inevitably increased the price of gasoline.

By April 2008, Sean Hannity and I launched “Drill Here, Drill Now, Pay Less.” The online petition attracted more than 1.6 million signatures. Vince Haley and I then wrote a book, “Drill Here, Drill Now, Pay Less: A Handbook for Slashing Gas Prices and Solving our Energy Problem.” Working with Dave Bossie and Citizens United, Callista and I made the documentary “We have the Power” showing all the different kinds of energy available in America. By August 2008, the Republican Convention was chanting “Drill, Baby, Drill.”

But the Left was (and still is) simply unable to cope with public anger over high prices of gasoline, diesel fuel, and heating oil. Its ideology gives it no flexibility in trying to make it easier to increase production and lower prices.

By 2012, it was clear that the green theology was blocking the development of adequate oil and gas production – even though the revolution in fracking was dramatically expanding American reserves and production potential. (North Dakota’s estimated reserve alone went from 800 million barrels to 24 billion barrels, a 3,000 percent increase.)

In response to the Obama administration’s anti-oil and gas policies, I wrote a second book, “$2.50 a Gallon: Why Obama is Wrong And Cheap Gas is Possible Now.”

President Obama attacked the whole concept of lowering the price of gasoline in a speech in Miami:

“It’s the easiest thing in the world (to) make phony election-year promises about lower gas prices.

“What’s harder is to make a serious, sustained commitment to tackle a problem that may not be solved in one year or one term or even one decade.”

Obama’s decade long problem was solved almost overnight by President Donald Trump, who brought in aggressive pro-entrepreneur, pro-energy production policies. The price of gasoline, diesel, and fuel oil dropped dramatically. In fact, prices indeed went below the $2.50 a gallon about which I had written. At the same time, America no longer needed to buy oil from nations that hate us. We were energy independent.

Now, the Biden administration has returned us to the failed energy policies of Presidents Carter and Obama.

Make no mistake: The prices you are paying at the pump are a function of Big Government Socialism’s hopelessly wrong ideological and theological rejection of reality – and preference for fantasies that simply do not work in the real world.

There are a lot of practical, safe things we can do to lower prices. One set of 10 practical steps to increase oil and gas production and reduce prices was just released by the American Petroleum Institute.

What is amazing, and a little disheartening, is many of API’s proposed steps simply require the federal government to stop being destructive.

We have come a long way from Abraham Lincoln’s “government of the people, by the people, and for the people” to the politicians and bureaucrats imposing higher prices on the American people and actively limiting their access to their own natural resources.

We can get back to gasoline at $2.50 a gallon (or less) and comparably priced diesel fuel and heating oil.

It only requires having a government that cares more for the health and prosperity of the American people than it does for ideological fanaticism.