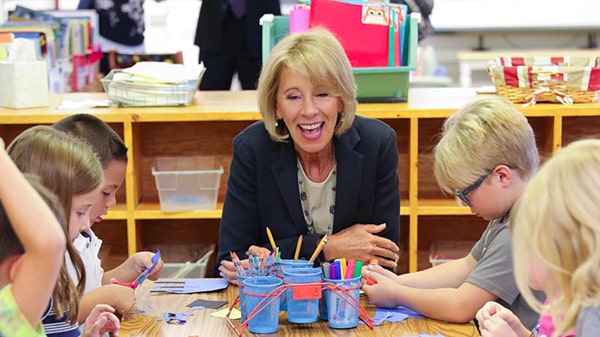 Former Secretary of Education Betsy DeVos has come up with a bold, liberating approach to giving younger Americans the best possible education. She calls it education freedom.

Former Secretary of Education Betsy DeVos has come up with a bold, liberating approach to giving younger Americans the best possible education. She calls it education freedom.

Education freedom is an important concept because it recognizes both the structural and technological opportunities for learning that have emerged since the development of the school choice movement. School choice began in Wisconsin under Gov. Tommy Thompson and State Rep. Polly Williams (a former welfare recipient who was Jessie Jackson’s state chair and became the longest serving Wisconsin state legislator with 30 years of service).

The addition of vouchers was the bold reform of 1989. However, at the time we assumed the only delivery system for learning was made up of physical schools. Vouchers sought to both expand the opportunities for students and parents to find the right schools for their needs and put competitive pressure on unionized public school bureaucracies and force them to improve or lose students.

Since the development of school choice and vouchers, there has been an explosion of new approaches and technologies from individual family home schooling, collective home schooling cooperatives, apprenticeships, and now online learning. At Gingrich 360, we work with Dr. Ben Carson’s American Cornerstone Institute, which has created the Little Patriots Program. It is a remarkable resource for students, parents, and educators looking to learn about American history in an engaging, fun, and informative way. Khan Academy, Prager University, and Udacity are examples of other online learning tools to encourage lifelong learners.

Secretary DeVos captured this explosion of choices and the education freedom they offer in her new book “Hostages No More: The Fight for Education Freedom and the Future of the American Child.” As DeVos wrote:

“Education freedom starts with the premise that every student is unique, and every student learns differently. This is something every parent knows. Yet we have a school system that essentially treats children as if they are all the same. At the core, my vision for American education is to ensure all children have the freedom to learn in their own way. It’s to give parents freedom to find the best option and fit for their children. … Critically, education freedom also means giving teachers freedom to meet their students’ needs in many different learning environments. As it stands, public school teachers have very limited choice in where they teach and in how they teach.

“The positive, aspirational vision for education freedom is this: students are empowered to find places to learn that maximize their potential rather than be trapped in government assigned, zoned schools. Every child has the opportunity and the resources to learn and to become a fully productive member of his or her community. Education freedom honors this vision. It puts the student, rather than the system, first. This alone – making children the center of our education system – is reason enough to advance this cause for every child.”

DeVos’s concept of education freedom has been translated into a new Arizona law that would expand its Empowerment Scholarship Account program. As Steve Moore wrote in the Committee to Unleash Prosperity Hotline newsletter:

“We’ve been saying for many months that THIS is the school choice moment we’ve all been waiting for. So we are standing on our desks cheering that Arizona’s legislature has passed what might be the most ambitious school choice bill in American history.”

While praising Arizona Gov. Doug Ducey and the American Legislative Exchange Council (ALEC) for championing the bill, Moore wrote that the ESA would offer $6,400 scholarships for Arizona students to attend the schools of their choice, including public, private, religious, or charter schools. Since 2011, the program has only been open to 11,800 students who had parents in the military, were in foster care, or were Native Americans living on reservations. However, soon all the state’s 1.1 million students could benefit from the program.

As ALEC and other organizations carry forth the message – and as more and more concerned Americans read Secretary DeVos’s book – we approach a genuine revolution in getting true educational freedom for all Americans.

No other education reform would do more to help poor children learn, leave poverty, and engage in lives of accomplishment and prosperity.

No other reform can more effectively prepare the next generation of Americans to compete with China and have a productive, effective, work force.

No other reform is as important in helping citizens learn enough to be truly self-governing and free.