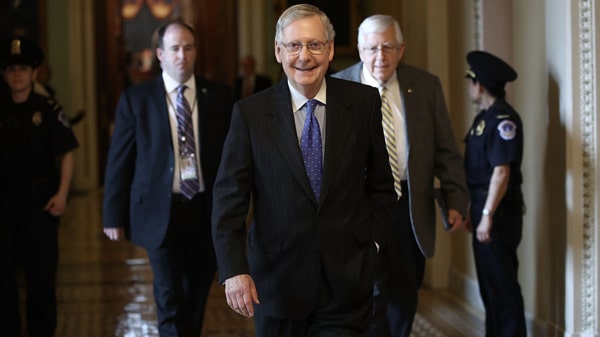 If the 2022 Senate elections are analyzed and run as big, nationalized races, the Democrats will likely lose the Senate by a wide margin.

There is consensus that U.S. House Republicans will win a majority this fall, and Kevin McCarthy will be the next Speaker of the House.

There is a lot more confusion about the U.S. Senate races. Republicans are handwringing and Democrats are hopeful as they think through the state-by-state races for U.S. Senate.

But there’s a flaw in the popular Senate race analysis. Most people are thinking about Senate races as small, individual contests. When you think of each race as small and individual, there is hope the Democrats could keep the current 50-50 split – or lose only a few seats. This kind of small race analysis emphasizes candidate quality, money raised, and current polling (that is inconclusive at best).

If the 2022 Senate elections are analyzed and run as a big, nationalized races, the Democrats will likely lose the Senate by a wide margin.

When you have 9.1 percent inflation (compared to 1.4 percent inflation when Donald Trump left office), Democrat candidates at any level should feel like they are in trouble. The highest price of gasoline in history (more than double the price two years ago) does not help them.

Given all these big problems, it is difficult to see how we can expect small race outcomes in U.S. Senate races – unless Republicans are extraordinarily committed to self-destructive behavior and out-of-touch Washington-focused consultants.

In Georgia, for example, Herschel Walker may have a hard time winning a small race campaign against an extraordinarily well-funded incumbent and professional preacher such as Sen. Raphael Warnock.

If Warnock runs – and Walker engages – a small race campaign, Walker will be drawn into fighting over trivia while the leftwing propaganda media (led by the Atlanta Journal Constitution) attack Walker and cover for Warnock.

At the broader level, political tsunamis occur late and build momentum rapidly. Campaigns that have designed big race choices then ride the crest of the tsunami.

The nature of tsunami elections was captured by Larry Sabato’s Crystal Ball analysis of how tsunamis swept away everything in his pre-election 2010 analysis:

“In our pre-Labor Day analysis, however, we noted a historical anomaly: Since World War II, the House has changed parties six times, and in every case, the Senate switched, too. In five of the six cases, most prognosticators did not see the Senate turnover coming.”

I have lived through several big race cycles.

In 1980, candidate Ronald Reagan hosted the first Capitol Steps event with a contract and stood next to virtually every GOP federal candidate in the whole country. That fall, Reagan beat President Jimmy Carter by the largest electoral college landslide against an incumbent president in history. The Reagan team effort also led to the pickup of 12 Senate seats and control of the Senate for the first time since 1954. No one saw the Republican Senate majority on the horizon. It was a shock. In fact, up until two weeks before the election, experts considered the presidential race too close to call. Then the American people rendered judgment, and it was all over for the Democrats.

In 1994, with the Contract with America, we again shocked the supposed experts. ABC News actually showed the Democrats ahead by five points just before the election.

The Los Angeles Times was more balanced – but still skeptical:

“Interviews with strategists in both parties indicate that Republicans have at least a 50-50 chance of seizing control of the Senate, where Democrats now enjoy a 56-44 advantage. The GOP is expected to pick up no fewer than four seats and perhaps as many as nine.

“On the House side, the odds are longer against the Republicans ousting the long-entrenched Democratic majority, but the possibility cannot be ruled out. In any case, the Republicans are expected to add at least 25 seats to their current holding of 178—against 256 for the Democrats. This would put Republican House strength above the 200 figure for the first time since they briefly controlled that chamber in the first two years of Dwight D. Eisenhower’s presidency.”

In the end, in 1994, the GOP gained eight Senate seats and 54 House seats – and control of both bodies.

In 2010, House Republicans made their biggest gains in modern times, 63 seats. Numerous candidates who were predicted to lose soundly had won.

These were not simply Republican or conservative tsunamis. These were American tsunamis. The American people were tired of policies that don’t work being forced upon them by bureaucrats and politicians who don’t live in the real world.

We are now on the edge of another American tsunami. As I wrote in my new book, “Defeating Big Government Socialism: Saving America’s Future,” there is an emerging tidal wave of Democrats, Republicans, and independents who want us to come together and solve problems with common sense rather than Washington sense. They are totally sick of Washington sense.

Some 87 percent of Americans want to restore the America that works. By 91 percent to 6 percent, the American people agree with Rev. Martin Luther King Jr. that the content of our character matters far more than the color of our skin.

This American tsunami is going to defeat an amazing number of sitting Democrat Senators and hopeful Democrat candidates.

So, the next time you hear some detailed state-by-state analysis, just remember they are discussing small races in a big race world.